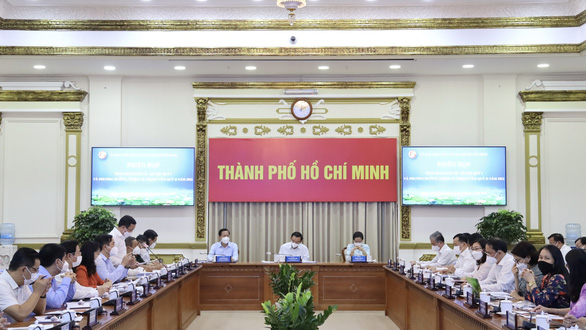 Speakers at a meeting held on Tuesday to review HCM City’s socio-economic situation in the first quarter. Photo courtesy of the HCM City Press Centre

HCM CITY — HCM City will take appropriate and timely measures such as controlling inflation to ensure economic recovery, Nguyễn Văn Nên, the secretary of its Party Committee, has said.

Speaking at a meeting earlier this week to review the city’s socio-economic situation in the first quarter, he said though the economy has gradually recovered, it has been affected by global events such as the ongoing Russia-Ukraine conflict.

The COVID-19 pandemic remains unpredictable in other countries, especially China, which is continuing with a zero-COVID approach, putting pressure on commodity prices due to the close trade relations between the two countries.

Nên said the city would continue to live with the coronavirus as mandated by the Government with a focus on vaccinating high-risk groups and children aged five to 12.

It would speed up the progress of major works such as Ring Roads 2, 3 and 4, and metro line Nos. 1 and 2, flood-prevention works, Tân Sơn Nhất international airport’s third passenger terminal, and social housing for workers, he said.

“It will cancel projects that have been delayed for too long.”

It would continue to resolve problems such as traffic congestion, air pollution and flooding, and focus on infrastructure development, administrative reforms and improving human resource quality, he added.

He expressed concern over media reports that some 400 medical staff in the city had quit in the first quarter, and promised incentives soon to encourage them to return.

Lê Thị Huỳnh Mai, director of the city Department of Planning and Investment, said in the first quarter the city’s GDP grew by an estimated 1.8 per cent year-on-year.

But retail sales of goods and services fell by 4.8 per cent to VNĐ267 trillion, she said.

Tax revenues were worth VNĐ121 trillion, up 9.4 per cent, while spending slumped by 33.8 per cent to VNĐ9.3 trillion.

Experts said the city needs to accelerate public spending. Last year it spent less than VNĐ30 trillion. It needs to increase the figure to VNĐ43 trillion this year.

HCM City contributes around VNĐ368 trillion to the Government’s coffers, or 25-27 per cent of the country’s total.

National Assembly Chairman Vương Đình Huệ recently praised the city for its socio-economic recovery, which has “exceeded expectations” at a meeting in the city. — VnExpress News