Simple coloured pencils may be just tools for children to create beautiful images, but they can also inspire artists to create stunning works.

Hưởng remembers the first pencils his father bought him after a business trip.

“The 36 colours really inspired me to draw at that time,” he told Việt Nam News. The set of pencils allowed children to imagine and create magical worlds at that difficult time.

He used pencils up to the time he started studying at the Industrial Fine Arts College. He has had a special love for pencils and has kept trying to turn them into pieces of art and items for the home. 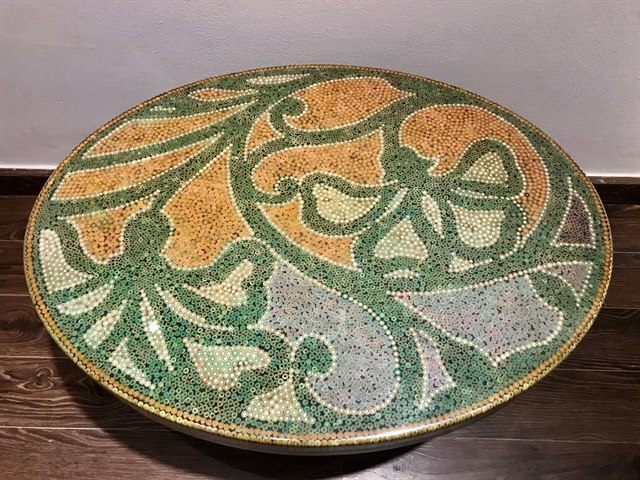 A table made from over a thousand pencils designed by Lê Xuân Hưởng. VnExpress News Photos Lê Hương

“I’m lucky to have opportunities to travel around the world as I run a tourism company,” he said. “I like to mix and match decorative styles. The home should be beautiful and cosy for all members of a family. Home should be the place where we find happiness, which may come from small beautiful things.”

Hưởng himself wanted to design artistic items to decorate corners and rooms, which is the reason why he started the Henry Le Design trademark for his products.

Some years ago, Hưởng and other designers created coffee tables made of wood and metal, which started a trend in the interior design market. 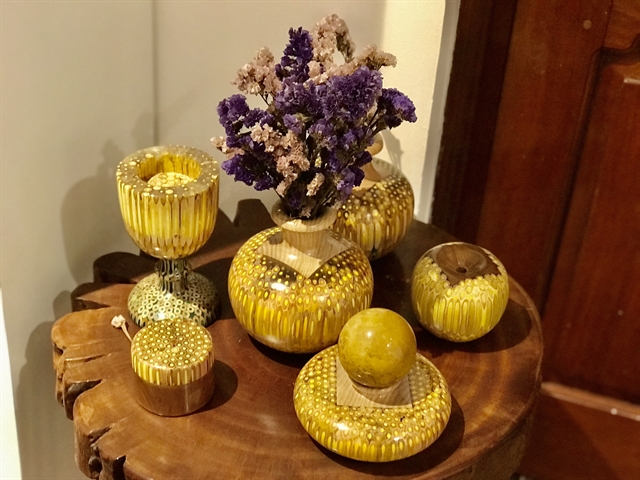 His products are designed to be decorative objects to brighten up the home.

“At first, I tried to create small things with pencils and epoxy like flower vases,” he said. “I could not imagine that the colours of the pencils and wood would bring out beautiful figures, which inspired me to create bigger things like coffee tables with pencils.”

The journey with pencils has been quite expensive.

“We have tried various kinds of epoxy from China, South Korea and the US,” he said. “At first we bought pencils at bookstores, which are costly. Then when we started production, we ordered pencils from manufacturing workshops. We choose those designed for export and that are safe for children.” 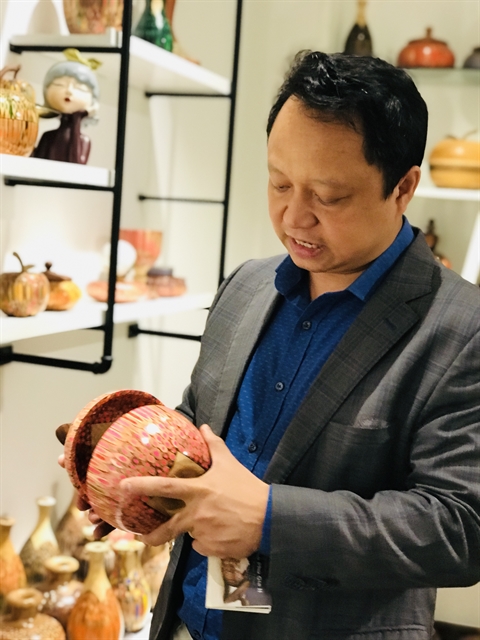 Hưởng and his team have spent lots of time trying out different designs before completing the products as they are seen now.

Hưởng said artisans from Nhị Khê and Thạch Thất craft villages helped him to form the products and complete his designs.

Designing a product is easy but making it poses more problems.

His team has thrown away many trial products due to failures in mixing the materials.

The artisans found tips to make the pencils stick firmly on the wooden foundation before the epoxy is put on to cover the pencils. The surface is then polished until the colourful pencils are unveiled inside the epoxy background. 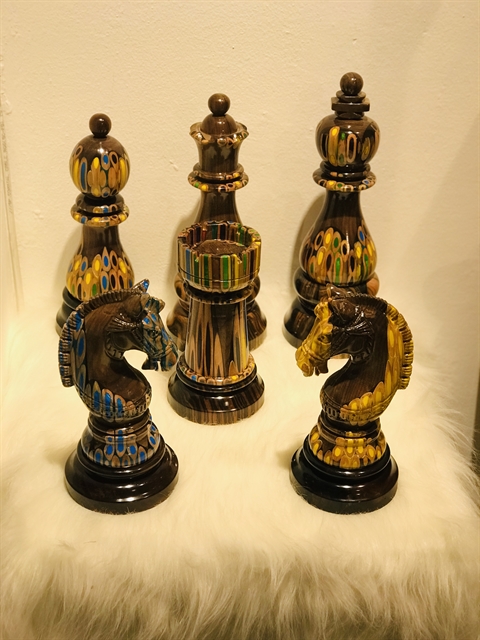 A chess set made of wood and pencils.

Hưởng said one of his most demanding products is the knight in the chess set, which combines two kinds of wood and pencils in details of the horse. He has big chess sets that are more expensive due to the valuable wood used. The big chess set can be displayed as decorations for homes or offices.

From the knight model, some customers suggested he make busts of famous people like former President Trump or other animals like rabbits. 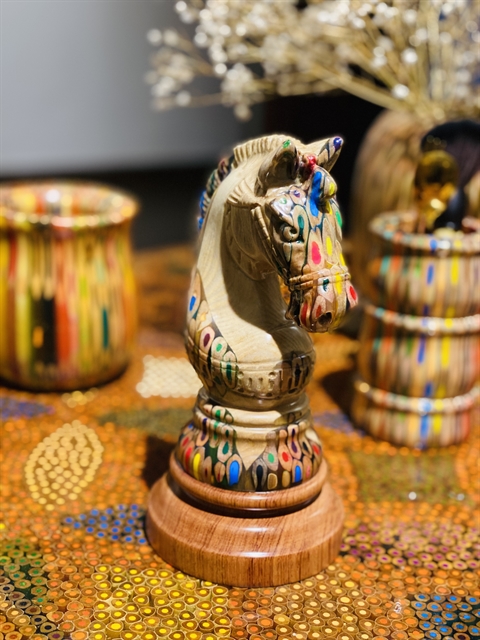 The knight chess piece is the most complicated product he has ever made.

“Ideas are diversified,” he said. “Yet turning the ideas into feasible projects is really challenging journey. I have tried to create the most realistic products at the most reasonable prices.”

He tries to offer more than one function for a single product like the castle in a giant chess set can be used as a holder besides being a decorative object.

Hưởng said he always tries to understand customers’ culture to design products for them.

“Vietnamese people like lotus figures, and the colours of yellow and red,” he noted. “While western people like apples, pumpkins, abstract patterns and combinations of colours.”

Hưởng said he knows more women like his objects so he is trying to pay more attention to men by using cool colours. 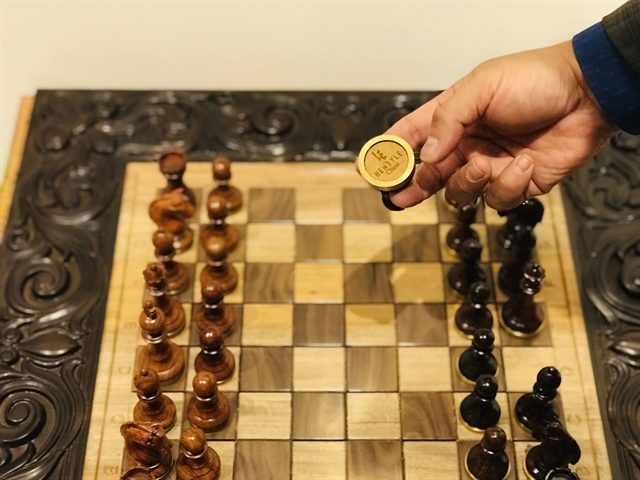 His product bears a trademark, which has become more popular with customers around the world.

Hưởng said the first coffee table was made as an artwork to display at his gallery on Văn Miếu Street.

“Though it was not as delicately made as the later tables, after only two hours, a couple from Australia visited the gallery and insisted buying it to put in a corner of their home,” he said.

The couple also asked him to sign the back of the table.

“At that time, I knew I should create unique objects like works of art, not producing the same objects en mass,” he said.

Hưởng’s products are carefully packed in a handmade bag and accompanied with a clear introduction on materials, functions and the inspiration behind the product.

On etsy.com, an American e-commerce site focusing on handmade or vintage items and craft supplies, one can easily find five-star reviews for his products.

“I bought two of these small apples and then a third because another colour I needed became available,” wrote a customer on January 5 on the site. “I love woodworking and I can say that these exceeded my expectations. They are very well made and the finish is nice and shiny.”

Hưởng said he is happy as more and more customers have bought several products from him as they are starting a collection. 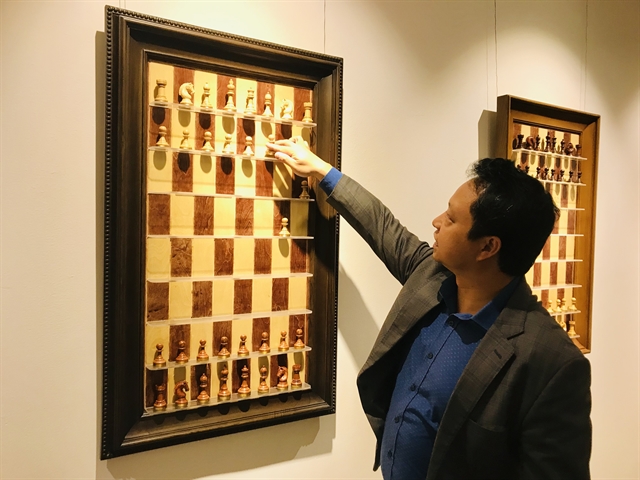 Hưởng designs chess sets to hang on the wall.

“The US is a big market while the European market is much stricter,” he said.

The pandemic has affected his production.

“The shipping price is much higher while the price for materials is also on a rise due to various reasons,” he said.

Yet the pandemic, on the other hand, has helped his business while hindering his tourism company so that he can concentrate more on designing objects.

Hưởng said he will concentrate more on new products like chess sets for western markets, try new epoxy materials as well as combine epoxy with different types of wood and reflective coloured powders.

“Through my customers’ satisfaction, I think that Vietnamese artisans can create beautiful things like those made anywhere else in the world provided that we know how to combine materials, designs and tastes of customers,” he said. VnExpress News 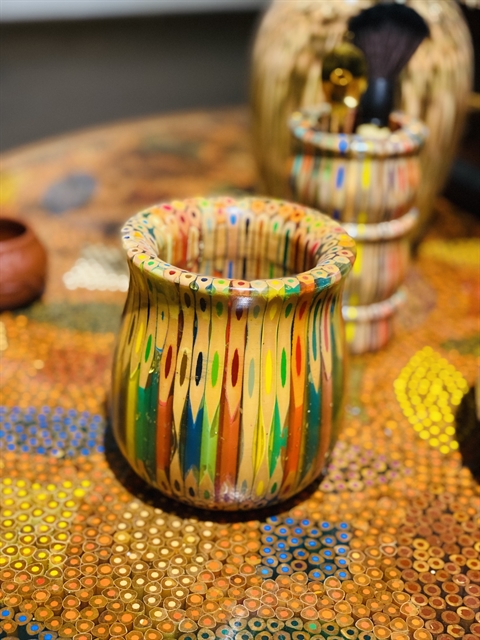