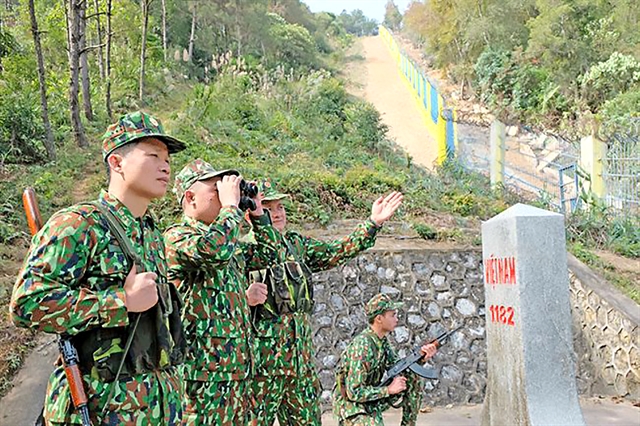 LẠNG SƠN — Residents of the border area in Lạng Sơn Province have benefitted greatly thanks to the close coordination between the Lạng Sơn Border Guard and local authorities.

Residents have participated in the self-management of borders and landmarks, as well as maintaining village security, social order and safety.

The border area in Lạng Sơn Province has 20 communes and one town with more than 70,000 people. Most of them are ethnic minorities.

Since soldiers from the Bình Nghi Border Guard Station offered help, people’s lives have changed. The rough and rocky roads were replaced with concrete ones, while many new houses have stable power.

Hoàng Văn Công, a resident in Tân Minh Commune, said that border guards regularly came to villages to explain the policies of the Party and the State. Thanks to the work, local people always have a sense of self-discipline, they do not enter and exit illegally, and they immediately notify the border guards when seeing strangers entering the border area.

The soldiers met and listened to local residents, understanding their difficulties, thereby finding solutions, and helping them in an appropriate and effective manner.

Since 2018, more than 730 households in border areas have received support from the border guards.

The Lạng Sơn Border Guard forces also taught locals how to grow plants and raise animals suitable to the conditions.

The soldiers guided them and supported them with plant care techniques.

Dương Trùng Lỷ, head of the Co Loi Village in Mẫu Sơn Commune, said that the border guards not only supported them with saplings but also gave them training about planting methods. This provided great encouragement for local residents, he said.

Lỷ hoped that locals would continue to receive support to gradually escape poverty.

Major Hoàng Trung Hiếu, commissar of the Ba Sơn Border Guard Station, said that the work was part of a programme to help poor households in border areas develop and reduce poverty.

The border guards encouraged people to develop their livelihoods, and together with the Border Guard forces firmly protect the Fatherland.

During the period, the poverty rate in border areas of Lạng Sơn Province fell from nearly 40 per cent to 15 per cent. — – VnExpress News