All aboard: the railway officer keeping things right on track 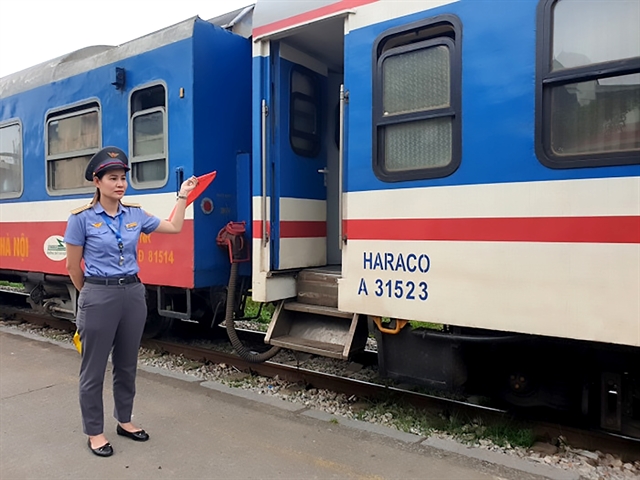 HÀ NỘI — For Mai Ngọc Thương, going to work isn’t a chore – far from it. The 39-year-old is the head of the safety inspection team of Hải Phòng City’s rail transport, and she goes home happy knowing her passengers have had a safe trip.

About 15 minutes after passengers leave the train, Thương’s team start their work, cleaning the carriages, checking the number of carriages, handing over the trip records to the driver and head of train authority, and checking the train’s safety system ahead of its next trip.

After completing all the work, she sits in the last carriage and updates the itinerary.

She sometimes checks the speed of the train through the speedometer to make sure the driver is travelling at the right speed.

“I don’t think it’s hard work for a woman like me. But I am always worried as the current railway infrastructure is degraded. We have fewer new carriages. Most of them are only upgraded. Troubles and damages can occur,” Thương told Giao Thông (Transport) newspaper.

Talking about the pressure at work, Thương said she can do many things that men do and is not afraid of dealing with cases related to accidents.

Sometimes though, accidents also haunt her.

On her first day in the role of the head of the safety inspection team, her train crashed into a young woman while travelling from Hưng Yên Province to Hải Phòng City.

At about 8pm, she noticed a strange sound on the tracks and the train stopped. She called the driver and heard that the train crashed into a person.

She and others used flashlights to look for the victim along the rails.

“I found the victim and asked the driver to move the train forward a few metres to get the victim out of the rail and handed over the case to a ground unit,” Thương said.

“Such accidents haunted me, but I chose this job so I have to accept them.”

Images of trains and stations have been with her since she was a child.

Her house is near Hạ Long station, Quảng Ninh Province. Her father was also a head of the train authority in charge of transporting goods on the Hà Nội – Quảng Ninh route.

She has three sisters and her father often took them to the station so they could join him on many trips.

Growing up, she decided to follow her father’s profession and entered the College of Transport.

Thương said she worked in many positions at different stations in Quảng Ninh Province after graduating.

After getting married, she left her hometown to Hải Dương Province to live with her husband’s family.

“I often have to work away from home, so I don’t have much time to take care of my children. My parents-in-law help me a lot when my husband is working in Quảng Ninh Province,” Thương said.

“During the COVID-19 pandemic in 2021, my team had to stay at home with no salary in eight months.”

During that time, she found another job with a higher income, but she returned to the office as soon as the railway services resumed after the pandemic.

In the first month of returning to work after the pandemic, she only received a meagre salary of VNĐ2 million.

“Although the salary is low, I still want to do this job. I love it and am happy to do what I love.” — VNS