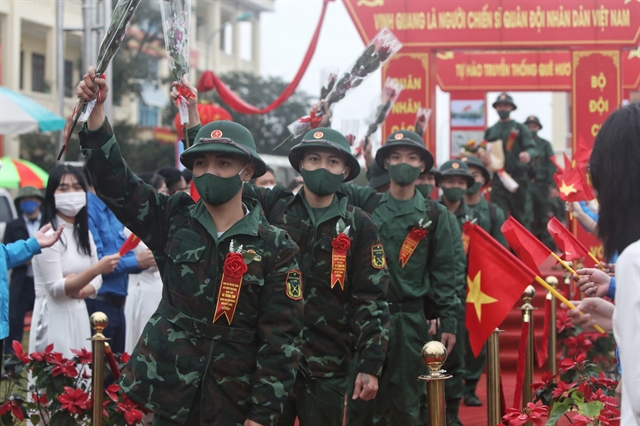 A ceremony was held in northern Bắc Giang Province on February 16 to see young people off for military service. — VNA/VnExpress News Photo

HÀ NỘI — Thousands of young people across the nation from all walks of life are excited and proud to join the army and hope to contribute to protecting the fatherland.

Graduating from Huế University in central Thừa Thiên-Huế Province with excellent academic results in biotechnology, Lê Đắc Hải had many opportunities to find a job with a high income but has registered to join the army instead.

He said he wanted to join the army to train in the military environment and to serve the country.

“I have tried to equip myself with knowledge and skills to be able to adapt to the high-discipline environment of the army and will try to study and fulfil my duty the best I can,” he told Vietnamnet online newspaper.

Hải’s father Lê Đắc Thân said he wished his son would be better trained and gain skills in the army to become more mature.

“I voluntarily registered to join the army. I feel very excited and proud to join the mission to protect the country and uphold the tradition of my family and locality,” he said.

Hải and Hiếu, together with thousands of their peers nationwide, will leave their homes for military service this month between February 16 and 20.

The province’s Military High Command said the selection and recruitment of youths for military services this year met many difficulties due to the pandemic.

The province organised a ceremony to see the young people off for military service on February 16.

In northern Hòa Bình Province, all are ready for the ceremony scheduled to hand over the new soldiers to army units.

Sùng A Phừ, 23, from Mai Châu District, registered to join the army although he is working for a business with a stable income.

“Although I have a stable job, I still want to join the army and follow the fatherland’s call. I promise to train myself and successfully fulfil all assigned tasks,” he told Vietnam News Agency.

His grandfather, Sùng A Tếnh, 78, said he used to be a soldier and was proud to see Phừ follow the older generation and serve. He said he believed that the army would train his grandson to be a better and more mature person.

Nguyễn Văn Lâm, chairman of Mai Châu District’s People’s Committee, said 100 per cent of local youths who joined the army this year were fully vaccinated against COVID-19. Local authorities have visited and presented gifts to the new recruits and will take care of the families of disadvantaged soldiers, he said. 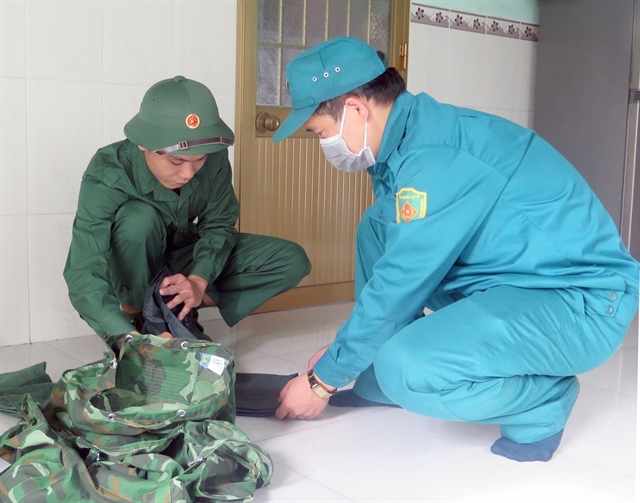 In northern mountainous Lai Châu Province, 19-year-old Lò Văn Cường from the Giáy ethnic minority group in San Thàng Commune, said he could not hide his feelings on knowing that he was joining the army.

Although the living conditions of his family are tough, Cường was still willing to join. He said that the army would provide him with a good education and training environment. Cường has spent most of his time in recent days at home to help his parents do housework before he leaves.

Hoằng Văn Duy, also from the Giáy ethnic minority group in the commune, said he felt proud to be recruited. “I will strive to fulfil all assigned tasks for the young generation,” he said.

Before registering to join, Duy was working for a company in northern Nam Định Province with a monthly salary of VNĐ5-7 million (US$217-300). However, with a desire to serve the country, Duy decided to temporarily put aside his job to perform military service.

Localities nationwide have reported completing the recruitment targets set for 2022 while strictly following COVID-19 pandemic prevention and control measures.  All the young men joining the army have been given tests for coronavirus. 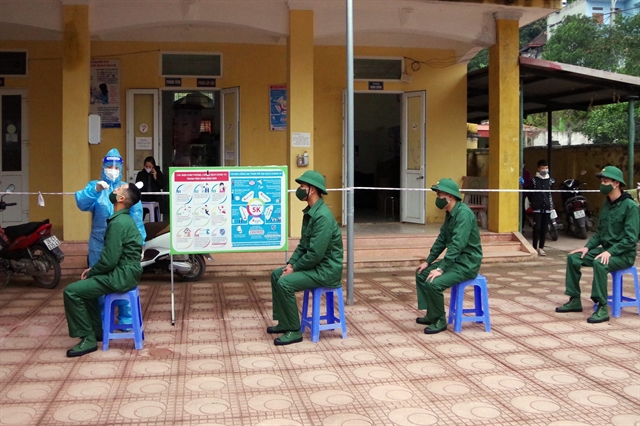 A medical worker takes samples of new soldiers for COVID-19 testing before they are handed over to army units. —VNA/VnExpress News Photo Thanh Hải

Lương said recruitment must ensure high-quality with the aim of building a modern, elite revolutionary army.

The Hồ Chí Minh Communist Youth Union of Hà Nội on February 12 held an exchange to encourage the young people before they leave home.

Secretary of the municipal Youth Union Chu Hồng Minh said that in response to the requirements of national defence, development and protection, the Youth Union has actively mobilised local youths to sign up.

The Youth Union defines the army as a “big school for youths to learn and be trained to help complete tasks.”

“Devoting themselves to national construction and defence is the honour, pride and responsibility of Vietnamese youths,” said Chu Hồng Minh. “You temporarily put aside your personal dreams and voluntarily join the army to protect your country. You all are the pride of your families, of the Youth Union and of the city.”