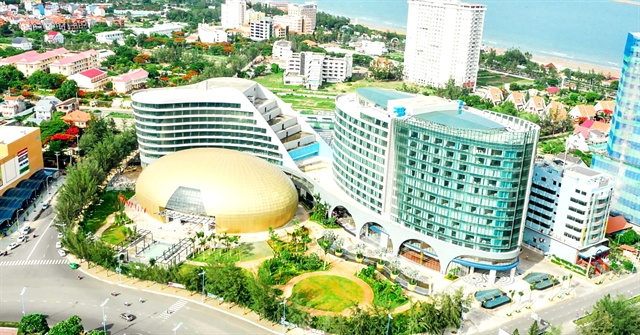 HÀ NỘI — Shares moved in an opposite direction on the two national stock exchanges yesterday with the VN-Index falling slightly without the support of large-cap stocks.

On the Hồ Chí Minh Stock Exchange, the VN-Index edged down 0.04 per cent to close at 1,492.10 points while it increased by more than 1.4 per cent on Tuesday.

The slump of some major stocks was attributable to the market downturn.

None of the top 10 biggest shares by market value on the southern bourse gained while seven lost value, which were the ones dragging the VN-Index most.

Overall, the market breadth was positive with the number of gainers outnumbering losing ones by 250:184. The other 78 closed flat.

Development Investment Construction (DIG) and Bảo Việt Holdings (BVH) were the top two shares positively affecting the VN-Index most. While DIG hit the ceiling price of a 7-per-cent growth, BVH rose 4.7 per cent.

Liquidity improved slightly but remained nearly the lowest in the past seven sessions with 702.5 million shares worth more than VNĐ20 trillion (US$870 million) being traded.

According to analysts at Viet Dragon Securities Co (VDSC), though the strong selling pressure has stopped and the market has returned to the state of exploration with low liquidity, the level of recovery was still low and money flow was still cautious in general.

“It is expected that the VN-Index will continue to probe supply and demand in the next session and the resistance area of 1,500 points may continue to put pressure on the market,” Phương Nguyễn, VDSC’s analyst, wrote in a note.

She advised investors to slow down to observe the market and consider the risk of each group as the market state is no longer as stable as before.

In contrast, the HNX-Index on the Hà Nội Stock Exchange extended gains to a second day, gaining 1.25 per cent to end the session at 429.12 points.

Liquidity exploded here with 83.3 million shares worth VNĐ2.4 trillion changing hands, a jump of 59 per cent in volume and 71 per cent in value compared to the previous session.

After a strong buying session on Tuesday, foreign traders were net sellers on both exchanges, offloading shares worth a total net sell value of nearly VNĐ23 billion. — VnExpress News