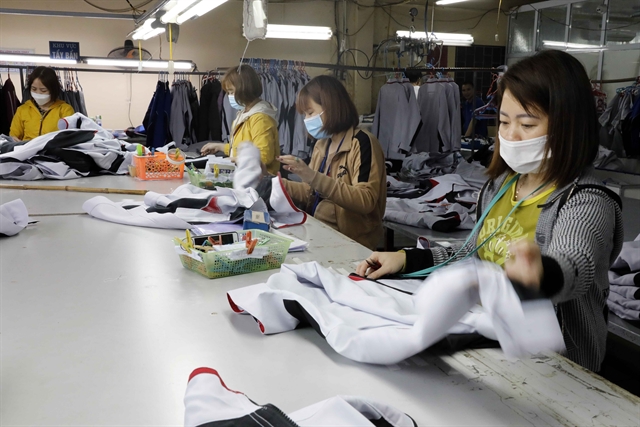 Production of workwear for export. With the implementation of RCEP, the export market for Việt Nam will expand, particularly to China, where Việt Nam does not currently possess any trade agreement. VNA/VnExpress News Photo Trần Việ

To estimate the economic and distributional impacts of RCEP in Việt Nam, WB constructed a baseline and four alternative scenarios. The baseline reflects the business-as-usual conditions, where the tariff schedules of previous agreements, including the most recent CPTPP, have been implemented, in parallel with the US-China trade war.

In the baseline, between 2020 and 2035, the average trade weighted tariff imposed by Việt Nam declines from 0.8 per cent to 0.2 per cent, while the tariffs faced by Việt Nam are reduced from 0.6 per cent to 0.1 per cent. To measure the effects of RCEP, the policy scenario will be compared against this baseline.

The four policy scenarios will measure the RCEP implementation incrementally. The first scenario, the Tariffs scenario, is exclusively the implementation of tariffs according to the RCEP tariffs’ reduction schedules.

Only when tariff reductions are combined with lower non-trade barriers (NTBs), are exporters able to take full advantage of the preferential rates under liberal Rule of Origin (ROO).

WB assumed that with the ROO regime, the third scenario, trade costs among its members are reduced by 1 per cent over the implementation period of 2022-2035. However, in WB’s simulations, implementation of ROO policy is costless, resulting in upper bound estimates of potential gains.

For the final shock, the productivity kick scenario, an increase of productivity, as the result of a higher degree of openness and falling trade costs, is implemented.

Việt Nam’s real income and trade expand faster than the baseline in the scenarios with tariffs, non-tariff measure reductions and rules of origin, and in the productivity kick scenario.

“Trade also increases the most in this scenario, with exports expanding by 11.4 per cent and imports by 9.2 per cent, relative to the baseline.”

In the baseline, which incorporates long-term trends and accounts for all the current tariff liberalisation commitments within the region (except RCEP), real income in Việt Nam is expected to grow 112.7 per cent between 2020 and 2035, with exports and imports increasing by 155.5 per cent and 134.8 per cent, respectively.

With implementation of RCEP, when rules of origin and productivity are included on top of tariffs and non-tariff measures reductions, real income grows faster, with an increase of 123.1 per cent between 2020 and 2035.

The benefits of the implementation of these measures are also reflected in trade, with exports and imports growing 182.5 per cent and 155.5 per cent, respectively, and between the same period.

In the scenario where only the tariff reduction is implemented, the impact on Việt Nam’s economy is negligible, with real income close to zero. Trade too sees a small reduction relative to the baseline, with both exports and imports declining by 0.3 per cent.

“With the implementation of RCEP, the market for Việt Nam will expand, particularly to China, where Việt Nam does not currently possess any trade agreement. Gains in the productivity kick scenario are concentrated mostly in the manufacturing sectors, in particular wearing apparel, electrical equipment, and textiles,” WB reported.

“Some sectors will suffer losses with the implementation of the agreement, due to a redistribution of resources to more productive sectors.”

The COVID-19 pandemic has taken a high toll in human and economic terms. RCEP could help cushion the negative effects of COVID-19 on economic growth by supporting regional trade and value chains, according to this report.

In the medium/long run, RCEP would increase the resilience of its members, it would make them better prepared in the face of future shocks by enhancing regional collaboration, reducing trade costs, and further diversifying their economies. RCEP offers an opportunity to boost growth and support recovery from the COVID-19 pandemic. VnExpress News