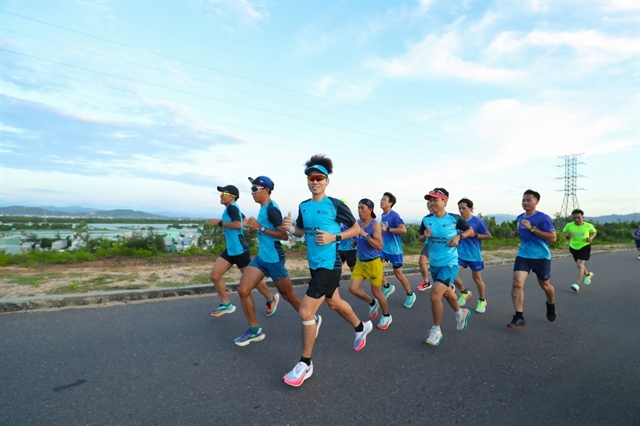 Runners on a test route for the VnExpress Marathon Sparkling Quy Nhơn scheduled for June 12. Photo courtesy of the organisers

HCM CITY — Thousands of runners will take part in the VnExpress Marathon Sparkling Quy Nhơn on June 12, according to the organisers.

Nearly 10,000 professionals and amateurs have signed up, a record number, as the annual race returns for a third time to the coastal city after being cancelled last year because of COVID-19.

Around 1,300 children aged six to 10 will take part in the one-kilometre race.

The runners will pass through the Thị Nại Bridge and streets that offer stunning views of the sea and mountains.

The event is aimed at spreading the sporting spirit in the community and popularise Bình Định Province’s natural landscapes and friendly people, according to Bùi Trung Hiếu, deputy director of the province’s Culture and Sports Department.

Provincial authorities were co-ordinating with the organisers for security, medical care and logistics for the event, he said at a press meeting in HCM City on Monday.

Athletes who break national records will also get prizes of electric cars.

The event is organised by VnExpress newspaper in co-ordination with the provincial People’s Committee. — VNS