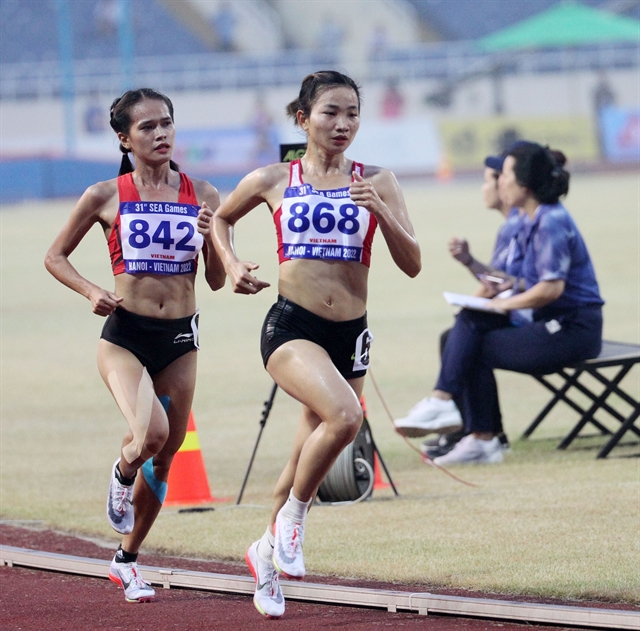 Nguyễn Thị Oanh took two running golds on May 14 at the Mỹ Đình Stadium during the first day of SEA Games 31’s athletics in Hà Nội.

She defended her title in the women’s 5,000m event with a time of 16min 44.06. Her teammate Phạm Thị Hồng Lệ came second, and Joida Gagnao of the Philippines came third.

Earlier in the morning, Oanh also defended her title in the women’s 1,500m event after finishing with a time of 4min 14.98sec.

It was Oanh’s third time winning these two events at the SEA Games.

This year in the 1,500m event, she ran about three seconds faster than three years ago in the Philippines but was about 1sec slower in the latter event.

“I am happy to win the first gold medal for Việt Nam in athletics. I hope that it will be a good start for the track-and-field team. Together we will complete and exceed our assigned target,” Oanh said.

Oanh will participate in the women’s 3,000m steeplechase to defend her title on May 15. Meanwhile, Lệ will run in her favourite 10,000m.

In the men’s javelin, Nguyễn Hoài Văn finally found the highest position on the podium. His final attempt of 70.87m brought him gold.

Abdul Hafiz of Indonesia and Melvin Calano of the Philippines were second and third, respectively.

Văn first took part in the SEA Games in 2019, earning a bronze.

In the mixed 4x400m event, Việt Nam failed to defend their title, losing out to Thailand in the last half-metre. – VnExpress News