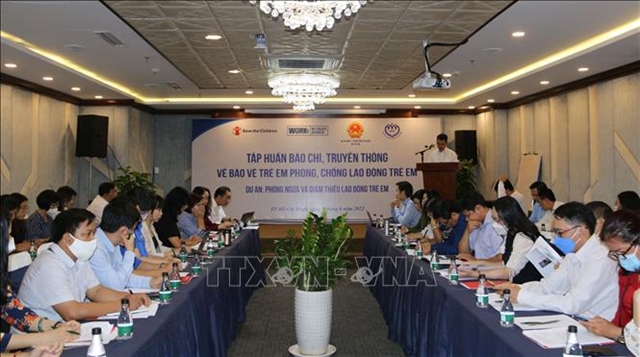 A conference on combating child labour being held in HCM City on June 7. Việt Nam has been gradually reducing the rate of child working as labourers over the years. — VNAVNS Photo

HCM CITY — Việt Nam is focusing on gradually eliminating child labour by raising awareness of the problem among parents and employers.

According to the Ministry of Labour, War Invalids and Social Affairs, laws and policies on child labour have been strengthened in recent years, and authorities and organisations have been working together to prevent child labour.

Its national survey on child labour in 2018 found the rate had dropped from 9.6 per cent of all children aged five to 17 in 2012 to 5.4 per cent, lower than the Asia – Pacific average.

This has helped the country’s global integration, enabling it to sign trade agreements with other countries and increasing international co-operation in reducing child labour.

Đặng Hoa Nam, head of the ministry’s department for children’s welfare, said child labour is still a problem in Việt Nam, especially in agriculture in remote areas that are difficult to monitor and small household businesses.

Many parents, businesses and even some officials are not aware of the importance of preventing child labour, he said.

“It is important to raise awareness of children’s rights and their importance, and inculcate knowledge and skills related to caring for children physically and mentally.

“Parents and families play an extremely important role in that, while people in the vicinity have a responsibility to prevent and report wrong behaviours.”

The ministry’s 2021-25 programme for combating child labour seeks to reduce the rate further to 4.9 per cent by 2025 and raise awareness among teachers, businesses and families through the media.

At a conference on preventing child labour held in HCM City on June 7, many delegates said children should also be taught how to protect themselves from exploitation and harm.

HCM City is celebrating June as an ‘Action Month for Children’ with events and media campaigns to raise awareness of protecting child and supporting disadvantaged children.

The law stipulates that children between 13 and 15 can be employed to do “light work” for up to four hours a day, but the work cannot interfere with their studies. — VNS