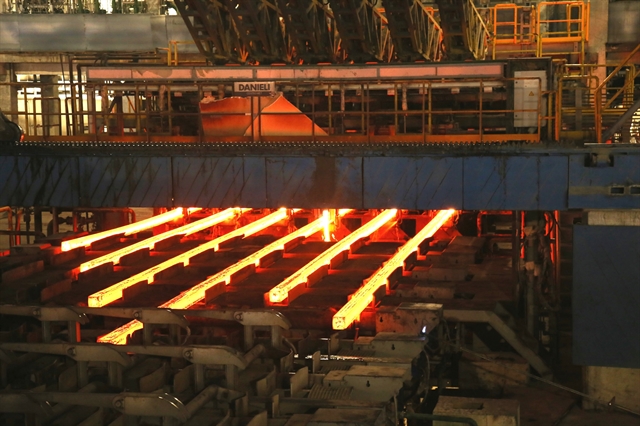 Inside a steel production plant of Hoà Phát Group. The company’s stocks hit the the biggest daily gain of 7 per cent yesterday, limiting the VN-Index’s losses. — Photo hoaphat.com.vn

HÀ NỘI — Indices struggled on Monday with the market benchmark VN-Index falling, as investors’ risk appetite was weak due to rising geopolitical tensions.

It claimed back some losses suffered in the last trading session but still posted a loss of nearly 0.4 per cent last week, and fell below the psychological threshold of 1,500 points.

The market’s breadth was negative with more stocks declining. And liquidity was lower than the previous session as nearly VNĐ23.58 trillion (US$1.03 billion) worth of shares, equivalent to a trading volume of nearly 730 million shares, was traded on HoSE.

Many large-cap stocks across sectors, especially bank, realty and retail stocks, witnessed poor performance yesterday. Of which, the VN30-Index, tracking 30 biggest stocks on HoSE, dropped 9.32 points, or 0.61 per cent, to 1,517.81 points.

Data compiled by vietstock.vn showed that Vingroup (VIC) led the downtrend after losing 2.65 per cent in market capitalisation. Other big real estate stocks posting a loss of at least 1 per cent were Vinhomes (VHM), Novaland (NVL), Vincom Retail (VRE) and Becamex (BCM).

However, the benchmark’s fall was limited by gains in energy, steel and fertiliser stocks. Of which, Hoà Phát Group (HPG) was the biggest gainer yesterday, up 2.83 per cent.

During the session, more than 101.1 million shares were traded on the bourse, worth nearly VNĐ3 trillion.