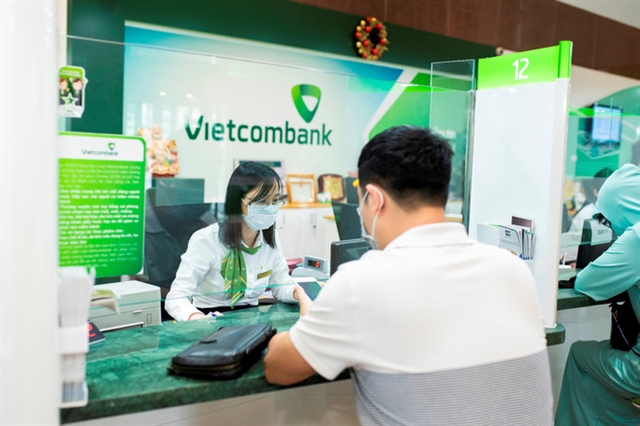 A banker and a customer at a Vietcombank branch. The bank posted a rise of more than 3.8 per cent yesterday, leading the market’s uptrend. Photo nld.com.vn

The market breadth was positive with 382 stocks increasing, while only 91 stocks declined. However, liquidity was lower than the last trading session before the holiday. Accordingly, investors poured over VNĐ18 trillion (US$796.5 million) into the southern market, equivalent to a trading volume of 578.2 million shares.

The benchmark’s rally was mainly driven by gains in large-cap stocks across sectors on bullish sentiment. The VN30-Index, tracking 30 biggest stocks on HoSE, rose 9.01 points, or 0.59 per cent, to 1,541.25 points.

Of the VN30 basket, 23 stocks increased with one hitting the biggest intraday gain of 7 per cent, while five slid and two stayed unchanged.

Vietcombank (VCB) led the market’s uptrend, with a gain of 3.82 per cent. It was followed by PV Gas (GAS), Vinhomes (VHM), Masan (MSN) and Vietjet Aviation JSC (VJC). These stocks were up at least 2.4 per cent, with VJC even increasing up to 7 per cent.

Supporting the index, other big stocks like Việt Nam Rubber Group (GVR), Hoà Phát Group (HPG) and Petrolimex (PLX) also posted strong performance, up in a range of 2.01 – 5 per cent.

However, profit-taking activities still weighed some large-cap stocks in real estate and banking. Vingroup (VIC) saw the biggest loss, down nearly 6 per cent, while BIDV (BID) and Vietinbank (CTG) were down 1.15 per cent and 1.63 per cent, respectively.

During the session, 54.9 million shares were traded on the northern bourse, worth VNĐ1.5 trillion.

The market’s rally was in line with the expectations from experts that it might rise in the first trading week after the Lunar New Year holiday.