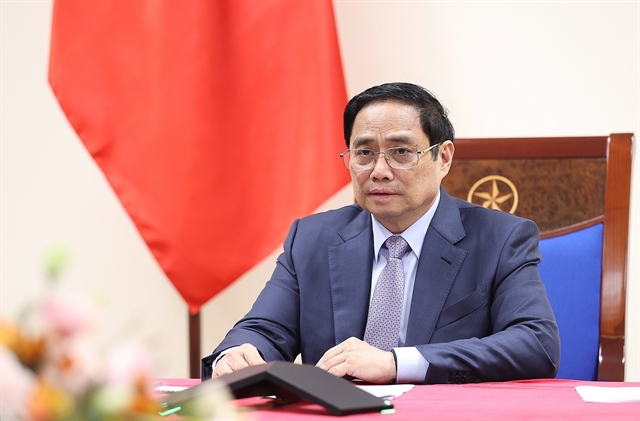 HÀ NỘI — Prime Minister Phạm Minh Chính has asked Pfizer Chairman and CEO Albert Bourla to expedite the delivery of 22 million doses of its COVID-19 vaccine for children aged 5-12 years to Việt Nam in the coming days, with a goal of completing this procurement contract in April or May at the latest.

Talking to Bourla over the phone late Tuesday, the Vietnamese Government leader said that the move would help protect children’s health and effectively carry out the safe reopening of schools in the country.

This is the second talk between the Vietnamese Government head and Pfizer’s leader since the fourth wave of COVID-19 broke out in Việt Nam in late April.

Chính said that Việt Nam recently used Pfizer’s vaccines to administer to children aged between 12 and 17, making them safer and more secure when going back to school. Nearly 96 per cent of the children in this age group have received the first jab, and nearly 90 per cent the second.

The health ministry of Việt Nam earlier selected Pfizer as the shots to be used for young children, following guidance from the World Health Organisation. It said the vaccination would not be mandatory, but recommended.

He also thanked Pfizer and Chairman Bourla personally for coordinating with the Vietnamese side to complete the supply of 51 million doses in the previous contract, as requested during a phone call in August.

He also asked Pfizer to frequently provide updates on its development of new vaccines and pledged favourable conditions for Pfizer to transfer its technology to the Vietnamese side and further pharmaceutical cooperation with Việt Nam.

With the close cooperation of Pfizer and the timely supply of vaccines from countries, including the US, Việt Nam has successfully carried out a rapid vaccination strategy, enabling it to transition to a strategy of flexibly and safely adapting to and effectively controlling COVID-19.

Bourla thanked the Vietnamese Government for the close cooperation and the appreciation the PM had given the company.

The Pfizer executive said he was impressed with Việt Nam’s vaccination campaign, and affirmed that he will make every effort to speed up the implementation of the contract on supplying the vaccine in the coming weeks.

He also stated that Pfizer could cooperate with Việt Nam in transferring technology to produce drugs to treat COVID-19.

PM Chính also invited the Pfizer leader to Việt Nam as a guest to discuss and promote a long-term bilateral cooperation plan between the two sides. — VnExpress News