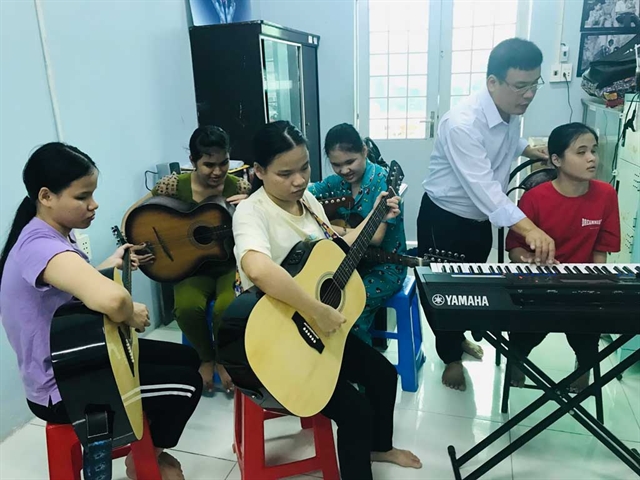 HCM CITY – A group of young music lovers of the Sóc Trăng Province Association of the Blind is determined to play musical instruments smoothly and organise quality performances as a way to spread positivity.

After a month since the band “Aspirations” consisting of visually impaired members was established, atmosphere at the provincial Association of the Blind has become more cheerful and bustling.

The band has 14 members aged 14 to 40. Each person has different interests, but they all share the same passion for music and the desire to live a useful life for their family and society.

Most of the band members are working as massage therapists at the Association of the Blind in Sóc Trăng Province.

Member Đoàn Thị Huỳnh Tươi, 23 years old, told Thanh Niên (Young People) newspaper that some members had been playing music for many years while others were just getting used to the instrument.

Besides teachers, the predecessors are always dedicated to guiding and sharing experiences for the latter, according to Tươi.

Visually impaired people have few opportunities and are also afraid to participate in outside recreational activities. With the new art playground, they are able to freely express their talents and passion.

For someone with artistic blood like member Diệp Hoài Vũ, his working energy has changed positively since joining the band.

“The atmosphere in the music class is always lively and fun. After each time practising the piano and singing together, I feel more relaxed, more excited, and less tired”, he added.

According to member Huỳnh Thiên Kim, 15 years old, entertainment activities of the blind usually include reading braille and listening to music or radio.

Kim feels happy to be able to join the band, strum the guitar with her own hands and sing along with her fellows.

“The band is a meeting place for people with similar backgrounds and interests. Thanks to it, we have more opportunities to be together to understand and love each other more,” Kim confided.

The founder of this band is Trần Bá Quang, vice chairman of the Association of the Blind in Sóc Trăng Province.

Quang has been blind since childhood and after making an effort to learn to play a number of musical instruments, he found that music can help boost mental optimism and give him more energy to rise above adversity.

He named the band Aspirations to express the desire of the blind to integrate, contribute, be recognized by society for their abilities, talents and dreams of a brighter future.

Quang said that it was initially difficult to establish a band due to lack of conditions, but this idea touched the hearts of many people, who later donated guitars, organs, electric drums, saxophones, bamboo flutes and subwoofers, full speakers, microphones and mixers.

Musician Trương Thanh Bình, who is in charge of teaching the band, said that he had to prepare a special lesson plan.

Teachers must spend a lot of time supporting blind students to recognise the structure of musical instruments and convert musical notes into braille characters so that students can learn easily.

All steps must be repeated many times for the children to remember. “Despite the slow progress, the precious thing about these young people is that they are very hard working, determined and never say the word ‘give up’,” Bình added.

Quang is proud that the band has helped many people to be more confident about themselves and they are seeking opportunities for cultural exchanges in different places.

“Every band member feels very excited to be able to perform in front of the community. Life is more meaningful as they have done something useful for society in their own way”, Quang said. – VNS