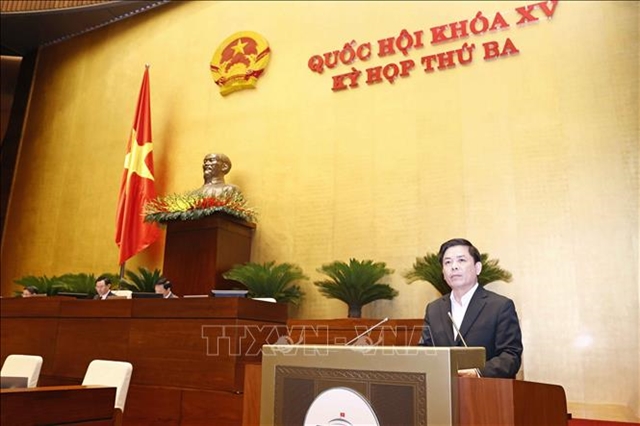 HÀ NỘI The trans-Việt Nam 2,744-km-long Hồ Chí Minh Expressway Project was planned to open in 2020 but so far only around 86 per cent of the work has been completed, Minister of Transport Nguyễn Văn Thể told National Assembly deputies on Tuesday.

In particular, the Government has yet to arrange investment for about 171km of the expressway, he said.

The Hồ Chí Minh Expressway project approved by the National Assembly in 2004 was once expected to be completed in 2010, with a total length of 3,183km, including its main line of 2,499km and a western branch of 684km long.

Passing through 28 provinces and cities from Pác Pó in the northern Cao Bằng Province to Đất Mũi in the southernmost province of Cà Mau, the expressway project was estimated to receive a total investment of VNĐ99,170 billion (US$4.3 billion).

However, in 2013, the National Assembly passed Resolution 66/2013/QH13 to adjust several contents, including delaying the opening time of the whole route to 2020. In the period after 2020, some sections will be upgraded according to expressway standards.

Reporting to the National Assembly on Tuesday on the implementation of the resolution, Thể said that so far, 2,362km have been completed, reaching 86.1 per cent of the whole route and about 258km of branch lines were completed too.

“Other 211 km of the expressway are under construction while the remaining 171 km has not yet been allocated capital for implementation,” Thể said.

However, due to the influence of the global economic crisis, the Government issued Resolution No 11/NQ-CP on February 24, 2011, on stopped or delayed projects, including component projects of the Hồ Chí Minh Expressway.

Therefore, from 2011 to the end of 2015, although investments for projects were approved, very few traffic projects, including the Hồ Chí Minh Expressway, were implemented.

“Due to limited resources, by the end of 2020, the Government couldn’t arrange enough capital to connect the whole route as per the goal of Resolution No 66/2013/QH13,” Thể said.

The Government asked for further investment to complete the expressway, Thể said, proposing that making the existing National Highway No 32 and National Highway No 21 connect with the Hồ Chí Minh Expressway, instead of opening a new route Cổ Tiết -Chợ Bến in the northern province of Phú Thọ.

Examining the Government’s report on the implementation of Resolution No 66/2013/QH13, NA’s Science, Technology and Environment Committee found that during the five years from 2017 to 2021, the project implementation only reached about 8 per cent of the total volume and the project was now nearly two years behind the planned schedule.

The committee proposed the Government direct the review and careful calculation of data, ensuring consistency and accuracy in allocating resources for the project, said the committee chairman Lê Quang Huy.

“It is necessary to clarify the basis for determining the capital demand of the project,” Huy said.

The Committee agreed with the Government’s proposal to make use of National Highway 32 and National Highway 21 as the section of Cổ Tiết – Chợ Bến had not been invested, to promote the efficiency of the entire expressway, Huy said. VNS