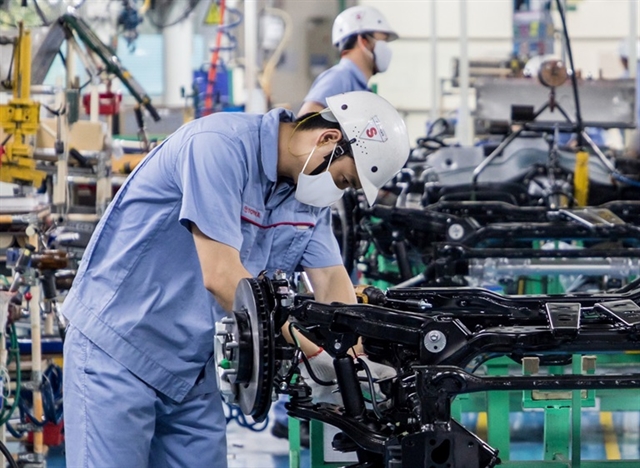 An automobile assembly line of Toyota Vietnam in the northern province of Vĩnh Phúc. Vĩnh Phúc is an important part of the global supply chain of Japanese enterprises. — Photo baovinhphuc.com.vn

The conference attracted the participation of nearly 700 delegates both online and offline from the two countries.

Highlighting their long-standing and expanding cooperation, she said Vĩnh Phúc’s official co-operative relations were set up with Japan’s Akita prefecture in March 2015, and Tochigi prefecture in December 2021, which have created important prerequisites for boosting bilateral partnerships in many areas.

By the end of May, the province had housed 435 FDI projects with a combined capital of US$7.33 billion from 20 countries and territories. With 59 projects worth $1.62 billion, Japan ranks third in terms of project number and value, but has always been the best performer when it comes to capital disbursement, project effectiveness, and contributions to the local budget, according to the official.

Lan affirmed that Vĩnh Phúc considered investors’ successes as its own and that it always provided optimal conditions, exerted efforts to address difficulties facing Japanese enterprises, and welcomed Japanese firms coming to invest and do business in the province.

In his remarks, Vietnamese Minister of Foreign Affairs Bùi Thanh Sơn said the Ministry of Foreign Affairs would further help provinces and cities across the country, including Vĩnh Phúc, to boost connections in the economy, trade, investment, science and technology with international partners, including Japan.

He expressed his hope that after the conference, Vĩnh Phúc would expand and intensify relations with Japanese partners, thus helping promote Việt Nam-Japan ties.

According to Japanese Ambassador to Việt Nam Yamada Takio, the two countries boast practical and strategic relations in all spheres, from politics and security to economic, cultural and social affairs.

In Việt Nam, Vĩnh Phúc is one of the centres to attract Japanese businesses and occupies an important position in the global supply chain of Japanese enterprises. Thăng Long-Vĩnh Phúc Industrial Park is an industrial park dedicated to Japanese investment and has a complete investment environment, making it easy for small and medium enterprises to invest in Việt Nam.

“It is not an exaggeration to say that Vĩnh Phúc is the most successful locality in attracting investment from Japan to Việt Nam,” he added.

He also acknowledged Vĩnh Phúc’s initiative in recent years to create the best conditions for Japanese investors, such as setting up a separate agency to support and give priority to vaccination for Japanese enterprises.

He called on Japanese enterprises to continue promoting images of Vĩnh Phúc so that more companies from his country would invest in the province, adding that the embassy would do its utmost to boost Japan–Việt Nam relations, including between Japanese localities and businesses in Vĩnh Phúc.

Keisuke Tokunaga, a representative from Toyota Vietnam, said that the enterprise had invested in Vĩnh Phúc Province since 1996. Since then, the business had always received the attention and support of the local government, such as surveying the investment environment, supporting site clearances and implementing investment projects.

In the two years affected by the COVID-19 pandemic, the province had made great efforts to improve the investment environment and support businesses through the rapid implementation of COVID-19 vaccination and took effective measures to help firms overcome difficulties, he added.

At the event, the Vĩnh Phúc People’s Committee and the Japan External Trade Organisation (JETRO) signed a memorandum of understanding on cooperation in investment promotions. — VNS