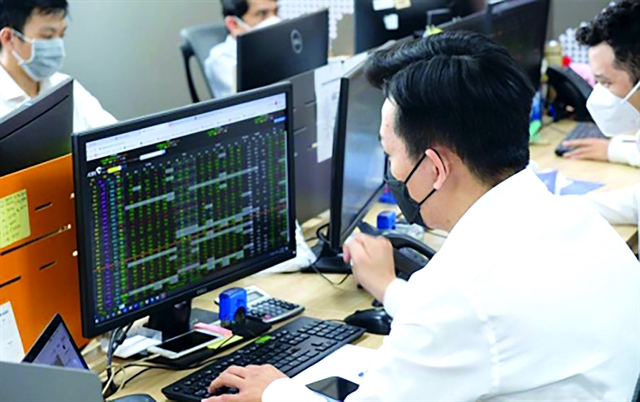 A man watching the market’s movement on his computer. — Photo diendandoanhnghiep.vn

HÀ NỘI — The market opened the week on a negative note, with both benchmark indices losing more than 1 per cent, as selling pressure weighed on investors’ sentiment from the beginning of the session.

The market’s breadth was negative with more stocks dropping, while liquidity was strong with more than 1.06 billion shares traded on the southern market, worth nearly VNĐ33 trillion (US$1.43 billion).

The benchmark’s strong correction was due to losses in many large-cap stocks, especially in banking, manufacturing, real estate and utilities sectors. Thereby, the 30 biggest stocks tracker, VN30-Index also posted a fall of 14.2 points, or 0.95 per cent, to 1,484.16 points.

In the VN30 basket, only three stocks increased, while 24 slid and three ended flat.

Data compiled by vietstock.vn showed that BIDV (BID) reported the biggest loss on Monday, down 4.26 per cent. It was followed by Vinhomes (VHM), Vinamilk (VNM), Việt Nam Rubber Group (GVR) and Development Investment Construction JSC (DIG), with DIG posting a maximum daily loss of 7 per cent.

Other big stocks contributing to the downtrend were Sacombank (STB), Hòa Phát Group (HPG), VPBank (VPB), Novaland (NVL) and two stocks of the Vin family – Vingroup (VIC) and Vincom Retail (VRE). The stocks dropped in a range of 0.62-2.14 per cent.

During the session, nearly VNĐ4.7 trillion worth of stocks, equivalent to a trading volume of more than 154.8 million shares, was traded on the northern market.

Meanwhile, foreign investors continued to withdraw from HoSE with a net sell value of VNĐ86.91 billion. They net bought a value of VNĐ51 billion in the morning trade.

On the other hand, they net bought VNĐ3.44 billion worth of shares on HNX. — VnExpress News