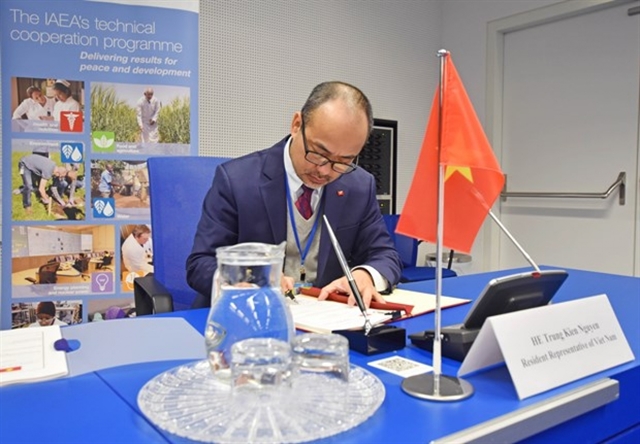 HÀ NỘI — Ambassador Nguyễn Trung Kiên, Governor – Permanent Representative of Việt Nam to the International Atomic Energy Agency (IAEA), is attending the regular meeting of the IAEA Board of Governors from June 6-10 in Vienna, Austria.

Speaking at the event, Kiên highlighted Việt Nam’s major policies and efforts to ensure nuclear security and safety and its atomic energy application for peaceful purposes and sustainable development.

The ambassador affirmed that the research, development, licensing, operation and deployment of the new nuclear technologies should be approached carefully.

“It is necessary to soon form a legal framework that complies with international law, including the 1982 United Nations Convention on the Law of the Sea, protects the environment, respects sovereign independence and territorial integrity, ensures transparency, and follows common procedures and practices,” he said.

The Vietnamese representative also suggested the IAEA continue to support member countries, especially developing ones, in improving their capacity in nuclear research and application, and response to radiation and nuclear incidents, and in building and perfecting the domestic legal framework on nuclear law.

Each year, the IAEA Board of Governors convene meetings in March, June, September and November. The June meeting this year sees the participation of representatives from 35 Board members, IAEA member countries and international organisations.