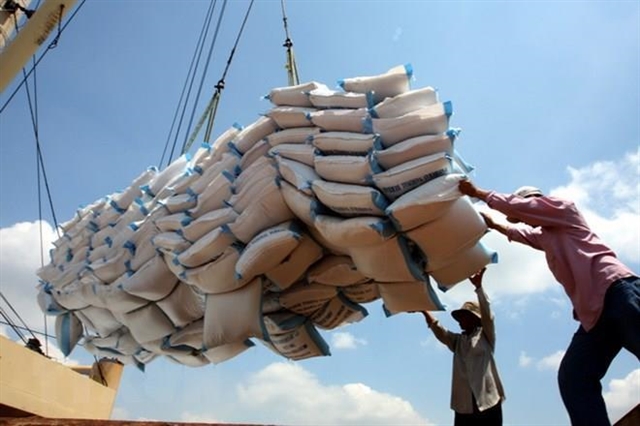 Rice loaded for export. The focus should be placed on building brands for Vietnamese rice and increasing brand recognition to expand export to ASEAN markets. — VNA/VNS Photo

HÀ NỘI — ASEAN has been a huge potential market for Vietnamese rice, and export firms should have a strategy to expand in the market of nearly 700 million people with similarities in culture and lifestyles, Nguyễn Thị Thu Thủy, deputy director of Export Support Centre under the Việt Nam Trade Promotion Agency has said.

Despite being the world’s third-biggest rice exporter after India and China, Indonesia is a potential market for Vietnamese rice.

Phạm Thế Cường, trade counselor of Việt Nam in Indonesia, said that each Indonesian consumed an average of 93kg per year, bringing the total annual demand to around 30.1 million tonnes.

Trần Lê Dung from the Việt Nam Trade Office in Malaysia said that although rice was the staple food for most Malaysians, this country of 32.7 million had only 700,000 hectares available for cultivation.

Malaysia’s rice production could meet around 60 per cent of the domestic demand, forcing this country to import around one million tonnes each year.

Dung said that the focus should be placed on building brands for Vietnamese rice and increasing brand recognition.

Cao Xuân Thắng from the Việt Nam Trade Office in Singapore said that the Vietnamese came third in exporting rice to Singapore, after Thailand and India, with a market share of 26 per cent.

To compete with the rice of Thailand and India, besides improving rice quality and enhancing brand recognition, Việt Nam’s rice companies could consider opening offices in Singapore to expand in this market.

According to the Ministry of Agriculture and Rural Development, Việt Nam exported about 550,000 tonnes of rice to earn $273 million in April, bringing the total export volume to 2.05 million tonnes, worth $1 billion in the first four months of this year.

The ministry predicted that Vietnamese rice export would increase in the coming months, driven by demand from China, Bangladesh, Iran and Sri Lanka.

Rice exports to the EU quadruple in Q1

Việt Nam exported 22,500 tonnes of rice to the EU for nearly $18 million in the first quarter of 2022, roughly a four-fold increase in both volume and value compared to the same period last year, thanks to preferential tariffs enjoyed under the EU-Vietnam Free Trade Agreement (EVFTA).

In the first four months of this year, over 30,000 tonnes of Vietnamese rice were shipped to EU nations, earning the country some $23 million, according to the Ministry of Industry and Trade’s Agency of Foreign Trade.

Italy rose to the top of EU importers, with spending on Vietnamese rice surging 26-fold year on year. Other major buyers included Germany, France, the Netherlands and Sweden.

Under the EVFTA, the EU is committed to purchasing 80,000 tonnes of rice annually from Việt Nam, which will enjoy zero duty for 3-5 years.