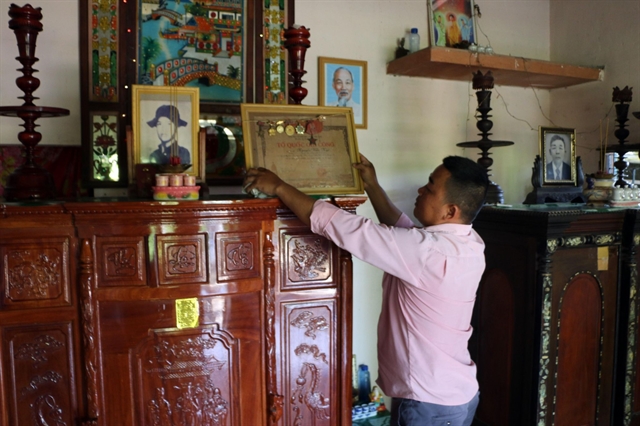 LONG AN — A statue of Vietnamese martyr Nguyễn Văn Ngộ was built in 2017 in Cambodia’s Svay Rieng province to commemorate the hero who lost his life for the Cambodian people in the war against the Pol Pot genocide.

Ngộ was born in 1959 in Mỹ Phú Commune, Thủ Thừa District, in the southern province of Long An. He died when he was just 20 years old in Cambodia.

More than 40 years have passed and people in Việt Nam and Cambodia remember him as a hero of the two countries.

Ngộ was an infantry soldier in Vice Platoon of 2nd Infantry Company under 502nd Battalion, 779th Command, Military Region 7. He participated in 13 battles in Cambodia. He commanded a squad with 33 kills and collected 30 guns of all kinds, actively contributing with his company to maintaining order and security in the areas that he was responsible for.

On September 1, 1979, Ngộ was informed that two civilians had been killed in a minefield, but their bodies had not been recovered for two days.

He volunteered to enter the minefield to bring out the two bodies.

When he got there, he found another body of a person killed by a landmine and an injured crying baby.

He sprung into action, clearing 11 mines to save the baby. However, the 12th mine exploded, and he was seriously injured.

Ngộ calmly encouraged his teammates to continue their duties, trying to get people out of the minefield.

Due to the severity of his wounds, he died.

His example of sacrifice was greatly admired by the authorities and people of Cambodia.

Ngộ was known as a person who was always exemplary in all aspects, living modestly and simply. He was awarded the Second Class Victory Medal.

On January 25, 1983, Martyr Nguyễn Văn Ngộ was posthumously awarded the title of Hero of the People’s Armed Forces by the State.

In a simple house in his hometown of Hamlet 4, Mỹ Phú Commune, the altar of Martyr Nguyễn Văn Ngộ is placed with his older brother Nguyễn Văn Niếp.

“My father had eight siblings. Of them, Ngộ was the best in the family. The family was very poor, but he worked hard until the day he enlisted in the army in 1978,” Luân said.

“Saying farewell to my father at that time, my uncle said that he would bring gifts when he returned home. However, more than a year later, the family were informed that he died in Cambodia,” Luân said.

Luân’s mother Nguyễn Thị Tiên said that she met a soldier who lived and fought with Ngộ in Cambodia.

The friend said that when Ngộ was about to take his last breath, he called his mother’s name and asked teammates to deliver his message to her, Tiên said.

Luân said the family was very proud to have such a heroic member who lives on in the hearts of the people of the two countries.

From the fighting example of his father and uncle, Luân always work hard and is nice to people. Currently, he is the leader of the cutting team, at Mainland Packaging Company in Lợi Bình Nhơn Commune, Tân An City.

Lê Thị Kim Kha, 48 years old, head of the Women’s Union in Hamlet 4, said that she was also proud to be part of a family with a long history of revolutionary tradition.

Her paternal grandmother is a Vietnamese Heroic Mother, whose husband and second son died in defence of the nation.

Kha’s father also fought bravely and was wounded during wartime. Her mother served in the Military Medical Hospital. Both of her parents joined the army when they were 15 or 16 years old. Listening to her father and grandmother’s talk about the hardships and sacrifices in the war, Kha said that she loved and appreciated life even more.

Long An Province shares a border of more than 133km with Cambodia, passing through 20 communes in five districts and a border town, adjacent to 16 communes in the two provinces of Svay Rieng and Prey Veng in Cambodia.

Responding to the urgent call from the Central Committee of the National Solidarity Front for National Salvation and Cambodian people, at the end of 1978, the Vietnam Volunteer Army Squadron and hundreds of volunteers in Long An Province set off on an international mission in Cambodia.

In 1979, Vietnamese volunteer soldiers and the Military and people of Cambodia defeated the hostile group of Pol Pot – Ieng Sary and liberated the Land of Temples from the genocidal regime.

The victory on January 7th, 1979 expressed the pure, faithful, wholehearted international unity between the two nations. The support of the Vietnamese volunteer soldiers and military experts for the Cambodian Military and people in their national liberation cause and their process of national construction and development has become a noble symbol and contributed to bolstering the unity and traditional relations between the two countries. — VNS