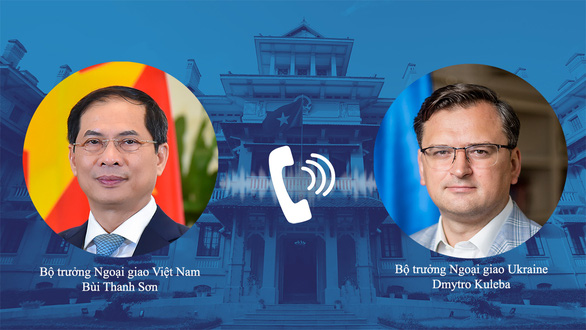 HÀ NỘI — As a traditional friend of both Russia and Ukraine, Việt Nam hopes that the sides will exercise restraint, ease tensions and continue dialogue efforts to seek a long-term solution in conformity with international law, with the interests of each side taken into account, Foreign Minister Bùi Thanh Sơn has said.

Việt Nam stands ready to join hands with the international community to contribute to the process, Sơn told Russian Foreign Minister Sergey Lavrov and Foreign Minister of Ukraine Dmytro Kuleba during his separate phone talks with them on March 15 and 16, respectively.

He affirmed Việt Nam’s consistent stance that international disputes and differences should be addressed by peaceful measures in line with basic principles of the UN Charter and international law, especially those on respecting independence, sovereignty and territorial integrity of countries.

The FM suggested Russia and Ukraine continue to organise humanitarian corridors and take measures to ensure safety for civilians, including Vietnamese people in Ukraine, helping them to evacuate from battle zones.

The FMs of Russia and Ukraine expressed their wish to maintain and enhance cooperation with Việt Nam, and pledged to try their best to facilitate the evacuation of Vietnamese citizens.

Sơn called on Russia to further create optimal conditions for Vietnamese in the country to stabilise their lives, production and business.

On losses to people in Ukraine, Sơn stressed that Việt Nam backed international efforts to provide humanitarian aid for them, saying Việt Nam would resume exchanges and cooperation with Ukraine after peace and stability are restored.

In a related move, Ambassador Lê Thị Hồng Vân, Permanent Representative of Việt Nam to UNESCO, stressed that cultural heritage sites need to be protected in all forms while addressing an extraordinary session of the UNESCO Executive Board, held in Paris on March 15 and 16 to “examine all the consequences of the current situation in Ukraine, in the different aspects of UNESCO’s mandate.”

The ambassador expressed her concern over the ongoing armed conflict in Ukraine, saying it was urgent to exercise restraint and stop using force to avoid causing more casualties and civilians losses.

She also emphasised the need to ensure security and safety for civilian facilities such as schools, memorial sites, and culture, information and communication establishments, in accordance with international humanitarian law.

Vân called for the observance of the UN Charter, especially the principles on respecting independence, sovereignty and territorial integrity of countries, not intervening in other’s internal affairs, not using or threatening to use force in international relations, and addressing disputes by peaceful measures.

Việt Nam appeals to relevant sides to de-escalate tensions and resume dialogue and negotiations via all channels to reach long-term solutions in conformity with international law, she said.

The ambassador continued to say that Việt Nam calls for the international community to further support and facilitate dialogues between all parties, and increase humanitarian aid to civilians.

It is necessary to ensure safety and security, and facilitate the evacuation of foreign nationals in Ukraine, including Vietnamese, without any discrimination, Vân said.

The ambassador proposed UNESCO carry forward its role in promoting humanist efforts to build a world of peace, sustainability and self-reliance.

At the end of the session, the UNESCO Executive Board issued a resolution, calling on relevant sides to end the war, and UNESCO and its member countries to roll out a relief aid programme for Ukraine.

This was the seventh special session during UNESCO’s 75 years of operation, held at the request of 19 members of the board. — VnExpress News