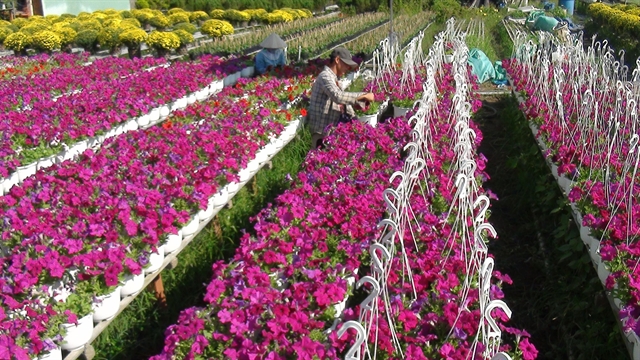 HCM CITY – Farmers in the Cửu Long (Mekong) Delta are getting high prices for flowers and ornamental plants since they reduced production for Tết (Lunar New Year) because of the COVID – 19 pandemic while demand is high.

They have almost finished the harvest and are selling to traders with the festival just a few days away. This year the Lunar New Year falls on February 1.

In Bến Tre Province’s Chợ Lách District, one of the delta’s largest producers of flowers and ornamental plants, many farmers have fully sold out.

Trần Hữu Hiệp in the district’s Hưng Khánh Trung B Commune said he sold 10,000 yellow ochna trees, half to traders from the north.

The flower is the symbol of Tết in the south, with families decorating their houses with the tree during the festival.

If farmers decide to sell their yellow ochna trees, they pick all the leaves around 15 days before Tết so that a tree only has buds and flowers for Tết.

The weather was favourable this year but yet most farmers reduced output because they feared the pandemic could impact demand.

The district grew only six million pots of flowers and ornamental plants this year, down two million from last Tết, according to the district Bureau of Agriculture and Rural Development.

Trần Hữu Nghị, deputy head of the bureau, said most farmers grow based on orders they get from traders before Tết.

The prices of flowers and ornamental plants have increased by 20 – 30 per cent this year, he said.

Besides the cut in supply, high input costs are also a major reason for the price increase, according to local authorities.

Farmers in the delta are also welcoming tourists to their gardens and fruit orchards and selling products directly to them.

The district has more than 300ha under the fruit, Đồng Tháp’s speciality and in high demand during Tết for both its appearance and taste.

Farmers in the delta are also getting high prices for other speciality fruits and items such as grapefruit, watermelon, dried fish, dried shrimp, and shrimp crackers, whose production too they have reduced this year.

The supply of fresh shrimp is down but he has not increased prices, he said.

“My establishment has produced more than five tonnes of dried shrimp for Tết so far.”

His dried shrimp, recognised as a three – star OCOP product under the national one commune – one product programme, fetches VNĐ1.5 – 1.8 million (US$66 – 79) per kilogramme.

Many fruit co-operatives in Vĩnh Long Province said they have reduced output of speciality fruits such as mango, mandarin and others by 60 – 70 per cent this year.

In Hậu Giang, farmers are expected to harvest 2,480ha of fruits and 2,000ha of vegetables for the Lunar New Year, down 5 per cent and 22 per cent, according to the province Plant Protection and Cultivation Sub-department.