Vietnam suffered a 1-3 defeat to Thailand in the semifinals of the AFF Futsal Championship Friday, unable to keep the momentum going after finding an equalizer.

Despite qualifying for the Futsal World Cup twice in recent years, Vietnam were still considered the underdogs against Thailand, the latter being one of Asia’s top teams.

In the first minutes of the match, Vietnam were able to hold their own and could have scored if they converted their chances.

Gia Hung and Thinh Phat created the first scoring chances for Vietnam, but could not beat Thai keeper Peerapat Kaewwilai . Thailand counterattacked briskly for a while, then realized that Vietnam’s defense was strong and they faced the risk of quick counters as well. So they slowed down the game’s tempo.

In the 11th minute, Chau Doan Phat won the ball in the midfield and shot with power but keeper Kaewwilai blocked it. The first half ended with all the chances belonging to Vietnam.

In the second half, Thailand proved to be more effective with and Muhammad opened the score in the 22nd minute. Ten minutes later, Vietnam equalized with a backheel finish by Nguyen Minh Tri.

But it didn’t take long for Thailand to reclaim the lead, as Muhammad shone again with a shot into the top corner.

In the remaining time, Vietnam deployed some power play, with the keeper coming out of the box and playing as an attacker. But it didn’t work and Vietnam conceded another goal. Kritsada Wongkaeo found the net from a counterattack, securing a 3-1 win for Thailand.

The defeat puts Vietnam into the third-place playoff Sunday. The winner of this game will win the last ticket to the Futsal Asian Cup this year. 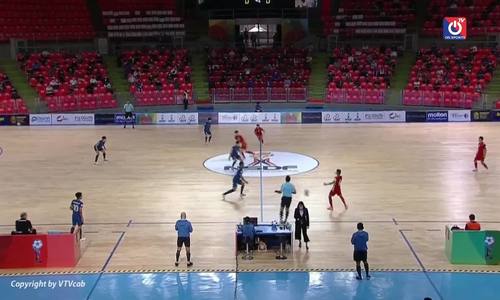