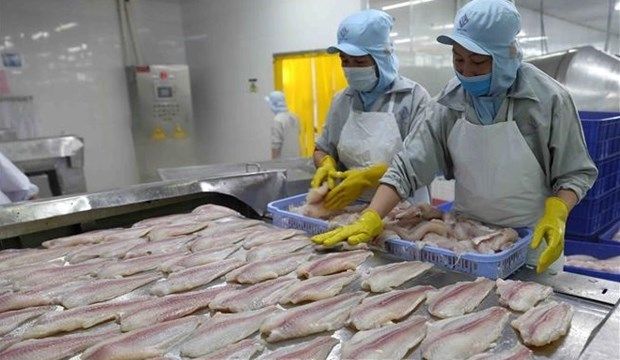 Total tra export value reached US$646 million in the first quarter of 2022, posting year-on-year growth of 88 per cent, according to the Việt Nam Association of Seafood Exporters and Producers (VASEP).

The association said pangasius exports to mainland China and Hong Kong have increased again. In the first three months of 2022, the total export value of pangasius to those markets reached $183.4 million, an increase of more than 163 per cent over the same period last year. Of which, the export value of pangasius in March reached $97.5 million, up 119 per cent. The tra export to those markets is forecast to be even more optimistic in the next quarter.

During the first three months, the pangasius exports to Malaysia also recovered after more than two years being affected by the pandemic. The total export value of frozen pangasius to this market was $7.45 million, up 138 per cent over the same period last year.

At present, Malaysia is the destination of nearly 40 Vietnamese pangasius exporting enterprises with diversified export products. Việt Nam and China are still the two leading suppliers of white fish products for Malaysia. Of which, Việt Nam has taken the lead, accounting for nearly 50 per cent of the total import value for white fish to Malaysia.

Việt Nam’s pangasius exports to the US market also gained growth in the first quarter of this year. The total export value of pangasius to the US reached $160 million, up 123 per cent year on year.

The local enterprises have been promoting tra exports to the US after the final result of the 17th period of review in the period on anti-dumping tax for Vietnamese tra concluded no enterprises should be imposed the tax.

It is forecast that the demand for essential goods, including food and seafood, will increase sharply, which will be a good opportunity for the businesses to export frozen pangasius to this market, according to VASEP.

The high world demand for pangasius has pulled the average export price of frozen pangasius fillets to $3.4 per kilo, an increase of $0.25 compared to January 2022.

In the second quarter of this year, the pangasius exports to these major markets are forecast to continue the high growth when consumer demand is estimated to surge due to competitive pangasius prices and a shortage of cod and pollock supply from Russia.

Dương Nghĩa Quốc, chairman of the Việt Nam Pangasius Association, said that China was a potential market for Vietnamese pangasius. This is the leading market in pangasius imports from Việt Nam, followed by the US and EU markets.

Now, China has a high demand to import Vietnamese pangasius. Therefore, along with the promotion of trade relations between the two countries, it is essential to provide information about the “Zero COVID” policy and food safety and hygiene regulations of China for local businesses, according to Quốc.

For the EU, this is a traditional market. Impacts from the pandemic and many other factors made the exports to this market decrease. However, the market has recently enhanced imports again.

Therefore, there are many export opportunities for Vietnamese pangasius and also local businesses this year.

The price of commercial pangasius in the domestic market recorded an increase of 40 per cent to VNĐ30,000 per kilo compared to the beginning of the year.

According to experts, higher prices for raw materials of fish and feed by 10-20 per cent compared to 2021 have been one of the main reasons for increases in the price of finished fish products.

In addition, the pandemic caused tra farming area to shrink, and a shortage of commercial fish for export contributed to pushing up prices. — VnExpress News