Việt Nam yet to make major progress against wildlife crimes 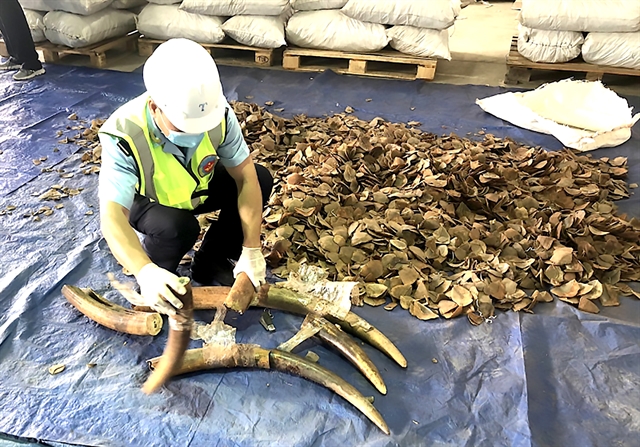 A large shipment of 456kg of ivory and 6.2 tonnes of pangolin scales were discovered by customs officers in Đà Nẵng City on January 11, 2022. They were smuggled in from Nigeria, officers suspect. — Photo cand.com.vn

HCM CITY — No mastermind behind transnational wildlife trafficking and trading has ever been brought to trial in Việt Nam, reflecting significant limitations, experts said at a seminar on Tuesday.

The seminar was organised by Education for Nature (ENV), a local NGO, to discuss achievements and challenges in tackling wildlife crime in the country.

As many as 144 wildlife related violations were discovered in the country last year. In 133 of these cases, suspects were arrested and follow up action taken, ENV said in a report.

Successful prosecutions of criminal irresponsibility have happened in about 60.2 per cent of the cases and in 49.7 per cent, defendants found guilty were sentenced to various terms including life imprisonment. The average penalty was 3.83 years, the report said.

It said the results show that the Government is determined about preventing wildlife crime, which is considered ‘very serious’.

However, the country remains a large market and important transit point in transnational wildlife trafficking, the report said.

On January 11, customs officers in the central city of Đà Nẵng confiscated a large shipment of 456kg of ivory and 6.2 tonnes of pangolin scales suspected to have been imported from Nigeria at the Tiên Sa Port.

The discovery indicates that Việt Nam will continue to remain a viable destination for wildlife traffickers if effective action was not taken.

ENV reported that nearly 60 tonnes of ivory and pangolin scales have been seized in the country’s seaport areas since 2018.

The report emphasised that no mastermind behind the violations of catching, transporting and trading wild animals from abroad to Việt Nam has been brought to trial.

Bùi Thị Hà, deputy director of ENV, said it was not easy to investigate, arrest and punish leaders of large-scale transnational wildlife trafficking chains because these people do not directly carry out activities like fulfilling customs procedures or collecting and packing wild animals in containers illegally transported to Việt Nam.

“However, this can be done if the authorities make more efforts to deal with the ‘root’ of illegal wildlife trade and transportation,” she said.

She said ENV was working with policymakers to strengthen the handling of wildlife violations, including measures to curb demand, strictly enforce laws and close gaps in wildlife protection policies.

It will continue to carry out campaigns against wildlife poaching, trafficking, trading and other violations, including those that aim at raising public awareness and encouraging citizens to participate in wildlife protection by reporting violations to authorities.

The hotline was launched in 2005 to receive information about wildlife violations. ENV staff will continue to collect and pass on information to authorised agencies and closely observe how violations are handled.  — – VnExpress News