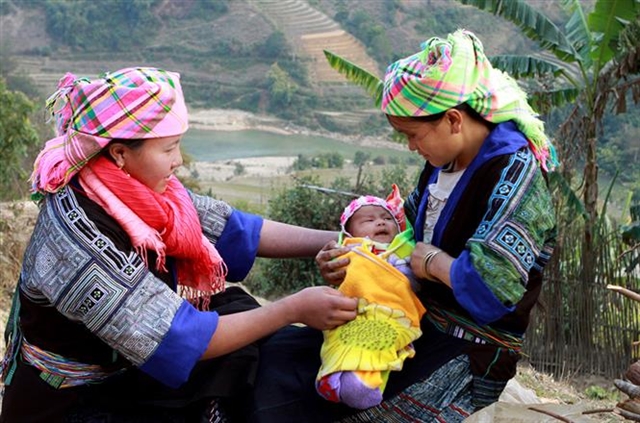 HÀ NỘI — Việt Nam has made significant progress in improving sexual and reproductive health over the past 20 years but disparities and inequalities still remain.

“The State of the World Population”, titled “Seeing the unseen: The case for action in the neglected crisis of unintended pregnancy”, was launched globally on March 30 this year.

Findings specific to Việt Nam were released yesterday and showed that while the maternal mortality ratio has declined to 46 maternal deaths per 100,000 live births nationally, it is still two or three times higher in northern, midlands and mountainous areas, and the Central Highlands.

In some rural locations, mothers are dying during pregnancy and childbirth, are often at home, and many are not seeking help from skilled birth attendants.

The report also included the results of a survey by Việt Nam’s General Statistics Office last year in collaboration with UNFPA and the United Nations Children’s Fund.

It showed that although 72.2 per cent of married women are satisfied with modern contraceptives, just a little over half (50.3 per cent) of unmarried women are happy with birth control available.

This is a key finding as the need for family planning methods among unmarried women is estimated at four times higher than those in wedlock.

The same survey also discussed with women their ability to refuse requests for sex from their partners. It noted that while 84.8 per cent of women felt they had the ability to say ‘no’, 57.4 per cent of Mông women said they were unable to refuse sexual advances, or could not make a decision.

Women without education or with pre-primary education also struggled with the ability to say ‘no’ to requests for sex, 38.6 per cent said they fell into this bracket.

Teenage girls were also asked about contraception, with 74.5 per cent saying they did not make the decision over birth control.

For women aged between 20 and 24, just over half (55.8 per cent) also said they were not in control over choosing contraception methods.

Naomi Kitahara, UNFPA Representative in Việt Nam, said: “This is a recipe for unintended pregnancy, and it is part of an unseen crisis unfolding right before our eyes everywhere in the world including Việt Nam.

“UNFPA is calling on policymakers and community leaders to prioritise women’s and girls’ rights, expand their choices including universal access to safe and effective contraceptives and make sure that every young person – boys, too – is fully aware of the risks of and means of avoiding unintended pregnancies. We need to listen to the voices of women, better understand their needs, and echo their calls for equality in every sphere,” she said.

UNFPA’s State of World Population this year said that nearly half of all pregnancies in the world, totalling 121 million each year, are unintended. For women and girls affected, the most life-altering reproductive choice – whether or not to become pregnant – is no choice at all.

The report warns that this human rights crisis has profound consequences for societies, women and girls, and global health.

Over 60 per cent of unintended pregnancies end in abortion and an estimated 45 per cent of all abortions are unsafe, causing from 5 to 13 per cent of all maternal deaths, thereby having a major impact on the world’s ability to reach SDGs. — – VnExpress News