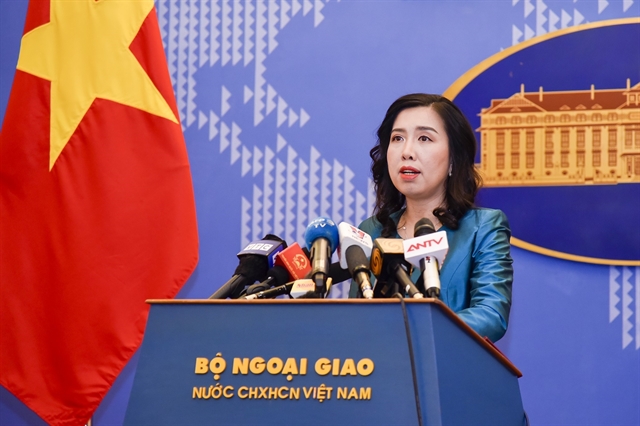 HÀ NỘI — Việt Nam always opposes and does not accept all claims in the South China Sea that are inconsistent with international law, including the 1982 United Nations Convention on the Law of the Sea (1982 UNCLOS), spokesperson of the Ministry of Foreign Affairs Lê Thị Thu Hằng said late Friday.

Việt Nam has repeatedly affirmed its consistent and clear viewpoint on East Sea disputes, both bilaterally and multilaterally, she noted.

The spokesperson made the remarks while answering reporters’ question regarding Việt Nam’s response to a Limits in the Seas study recently released by the US Department of State.

The study disputes four categories of China’s maritime claims in the South China Sea: sovereignty claims over maritime features that are submerged below the sea surface at high tide beyond lawful limits of any State’s territorial area; straight baselines enclosing various features within vast areas of open spaces in the sea; claims to internal waters, a territorial sea, an exclusive economic zone, and a continental shelf that are based on treating each claimed South China Sea island group “as a whole,” which is not permitted by international law; and finally,  China’s so-called possession of “historic rights” in the South China Sea.

The study asserts that China’s expansive maritime claims in the South China Sea are unlawful and “gravely undermine the rule of law in the oceans.”

Việt Nam acknowledges the US Department of State’s announcement of the study, the 150th in the Limits in the Seas series, Hằng said.

Việt Nam once again calls on parties concerned to respect its sovereignty, sovereign right and jurisdiction in the South China Sea, as well as diplomatic and legal processes, and make active and substantive contributions to maintaining peace and stability, and safeguarding security, safety and freedom of navigation and aviation, the integrity of UNCLOS, and the rules-based order, she said. — VnExpress News