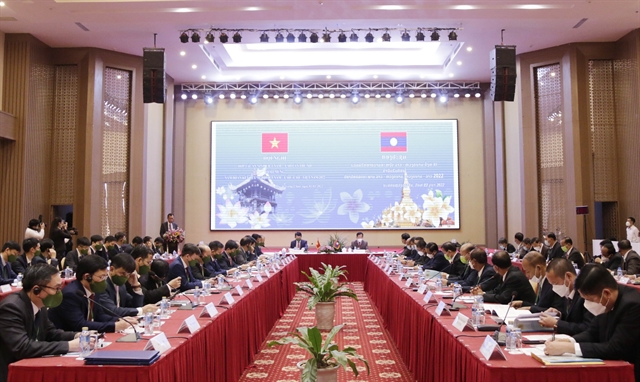 Kongthong said the conference is an annual forum for the two security forces to strengthen their great friendship, special solidarity and comprehensive cooperation. The conference, one of the activities in celebration of the Việt Nam – Laos, Laos – Việt Nam Friendship and Solidarity Year 2022, oriented future cooperation, contributing to stabilising political security and social order and safety, creating favourable conditions to perform each country’s tasks of building and defending the Fatherland, and building a peaceful, stable and developing ASEAN Community.

Quang expressed his hope that the two sides will maintain effective and practical coordination, and periodic meetings between their security forces and border localities, and work to prevent hostile forces from taking advantage of one country against the other, as well as undermining political stability, security and order in each country, and sabotaging the great friendship, special solidarity and comprehensive cooperation between Việt Nam and Laos.

They agreed to maintain the effective implementation of existing cooperation mechanisms between the two security forces, and step up information sharing and coordination in addressing the impact of non-traditional security threats that affect ties between the two countries in general, and the two Ministries of Public Security in particular.

The sides also pledged to closely coordinate at international and regional security cooperation forums, promote collaboration in preventing and fighting international terrorism of ASEAN countries, and ensuring security for major events to be held in Việt Nam and Laos in the coming time,

On this occasion, the two deputy ministers signed a Memorandum of Understanding of the 12th Vietnam – Laos Security Cooperation Conference. — VnExpress News