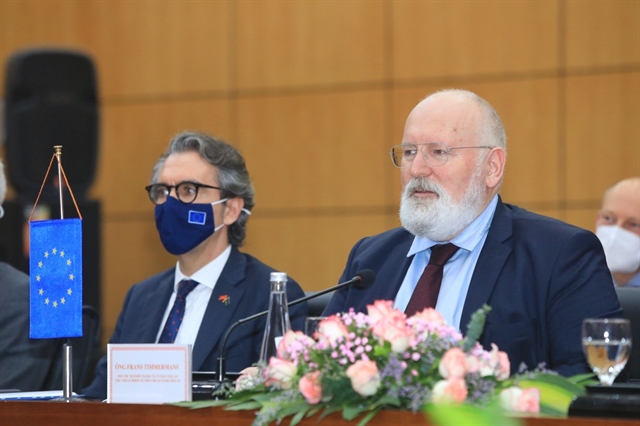 Diên hailed the visit by the EC official, as Việt Nam and the EU are building specific action plans to realise the outcomes of the 26th United Nations Climate Change Conference of the Parties (COP26).

The minister asked for support from the EU with strong commitments and actions in climate change mitigation and green transformation, in the transformation towards a green, circular and sustainable economy.

Both sides discussed issues of shared concern such as adapting to climate change, plans to realise commitments at the COP26 and power transformation plans as well as the development of the circular economy.

Minister Diên said that Việt Nam’s commitments at the COP26 – especially the goal of achieving net-zero emissions by 2050 – showed the country’s determination to switch from traditional fossil energy sources to green energy resources to reduce greenhouse gas emissions, together with cooperation and support from the international community in both financial resources and technology.

The Ministry of Industry and Trade will prioritise support for clean and renewable energy projects and is willing to coordinate with partners and donors from the EU in the field, he said.

Sustainable development cooperation between the two sides has been implemented positively and efficiently over the years through the institutions within the EU-Việt Nam Free Trade Agreement (EVFTA), he noted.

He said that it was Việt Nam’s first deal with content related to sustainable development, which showed the country’s attention to the balance between trade and environmental protection.

“Thanks to the EVFTA, Việt Nam’s has favourable conditions to access modern technologies from the EU and draw more projects to speed up the growth of the green and digital economy as well as renewable energy, helping Vietnamese products meet technical and environmental requirements in the EU market,” he said.

At the meeting, both sides expressed delight at the Việt Nam-EU cooperation in economy, trade and energy, and agreed to strengthen their partnership.

The Vietnamese side proposed that the EU continue to support and give priority to technical and financial support and the transfer of technology to Việt Nam, including the sustainable energy transformation programme and the Việt Nam Energy Partnership Group.

According to the General Department of Việt Nam Customs, last year, trade between Việt Nam and the EU reached US$57 billion in 2021, up 14.5 per cent year on year, with Việt Nam’s export revenue rising 14.2 per cent to 40.1 billion.

The Import-Export Department reported that in the first year of implementing the EVFTA, the export revenue of products using the EUR.1 certificate of origin reached about $7.71 billion. — VnExpress News