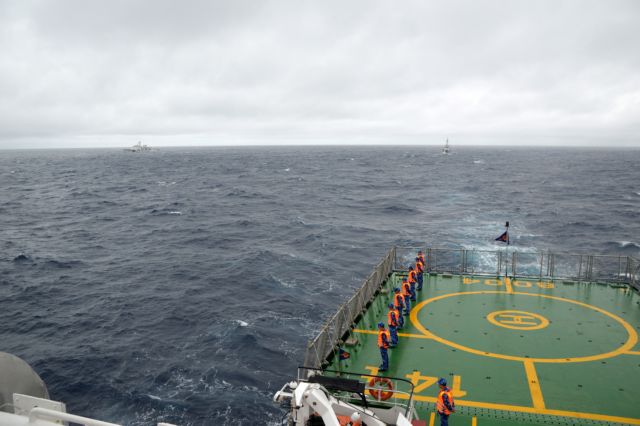 The two coast guard ships of Việt Nam and China ran parallel with the demarcation line in the Gulf of Tonkin during their joint patrol. — VNA/VnExpress News Photo

HÀ NỘI — Coast guards of Việt Nam and China completed their joint patrol in the waters adjacent to the demarcation line in the Gulf of Tonkin from April 19 to 21.

This was the first such move between the two sides in 2022 and the fourth conducted since a fisheries cooperation agreement in the Gulf of Tonkin waters between Việt Nam and China expired on June 30, 2020.

The forces conducted telephone exchanges and supervised fishing vessels operating in the area during their work.

They also explained fishing and COVID-19 control regulations, along with practising joint search and rescue at sea.

According to Colonel Trần Văn Thọ, Commander of  Việt Nam Coast Guard  Region 1, who led the Vietnamese side, the joint patrol was successful, contributing to promoting the relationship between the two Parties, States and peoples of Việt Nam and China, and between the two Coast Guard forces. — VnExpress News