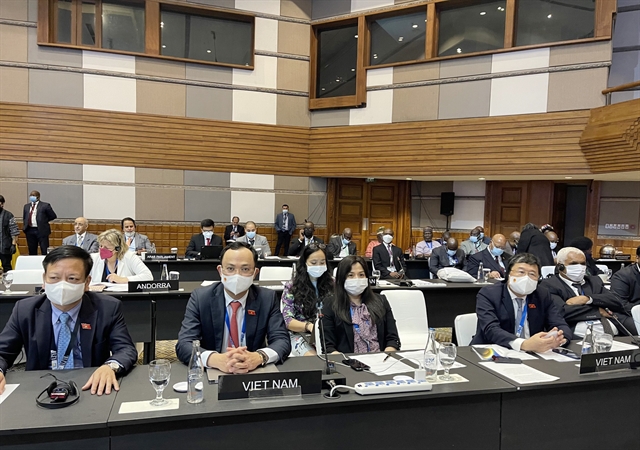 JAKARTA — A Vietnamese delegation attended a discussion on emergency issues at the 144th Assembly of the Inter-Parliamentary Union (IPU) in Bali, Indonesia, on Tuesday.

Addressing the event, Thái Quỳnh Mai Dung, standing member of the National Assembly (NA)’s Committee for External Relations, said that peace and cooperation was the top priority and goal of Việt Nam, which is also the purpose of the IPU from the very first days of its establishment 133 years ago.

Dung underlined that international conflicts must be settled through peaceful measures in respect of basic principles of international law and the UN Charter and sovereignty equality and political independence and territorial integrity, non-interference in internal affairs of states and not using or threatening to use force.

Việt Nam is deeply concerned about the current armed conflict in Ukraine, she said, calling on all parties to maximise restraint and immediately end the use of force to avoid further casualties and damage and to reduce tension and resume dialogue and negotiations through all channels.

Việt Nam recognises negotiation efforts among the partners and hopes that they will work to protect the safety and security of civilians and civil infrastructure works to suit international humanitarian laws, she said.

Dung also called on the international community, including IPU member parliaments, to continue creating favourable conditions for negotiations among all parties, ensuring the safety of life and property as well as the rights and interest of all peoples, backing the protection of citizens, including Vietnamese people in Ukraine. — VnExpress News