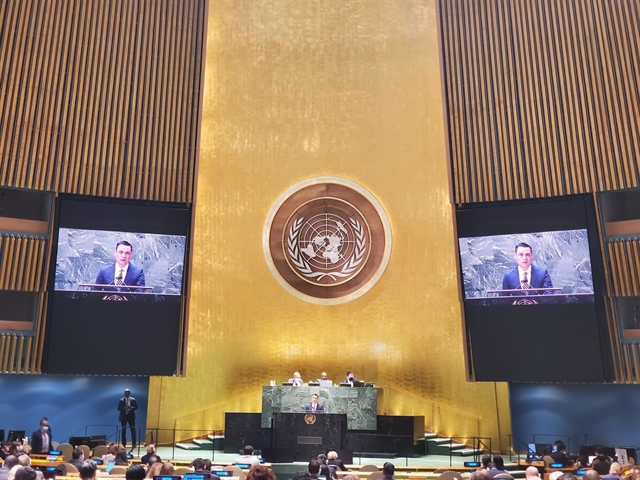 HÀ NỘI — Ambassador Đặng Hoàng Giang, head of the Permanent Delegation of Việt Nam to the United Nations (UN), has called on parties involved in the Russia-Ukraine tensions to exercise restraint, stop the use of force, resume dialogue, and seek long-term solutions to differences.

Addressing the UN General Assembly’s emergency special session on the situation in Ukraine on March 1 (US time), Giang welcomed the dialogue on February 28 between the Ukrainian and Russian delegations, and expressed his hope that the parties will continue maintaining dialogue towards the above-mentioned solutions.

In the address, Giang recalled Việt Nam’s history of enduring wars, saying that conflicts today stem from “obsolete doctrines of power politics, the ambition of domination and the use of force in settling international disputes”.

Việt Nam understands first-hand that, once war breaks out, it only causes endless suffering for the people and severe consequences to many aspects of life in involved countries.

He emphasised the need to ensure security and safety of the people and protect essential infrastructure in accordance with international humanitarian law, and asked the international community to continue providing humanitarian aid for civilians and refugees.

Expressing concern over the ongoing armed conflict in Ukraine — a sovereign Member State, Giang called on all concerned parties to de-escalate tensions and resume dialogue and negotiations through all channels, in order to reach a lasting solution that accounts for the interests and concerns of all parties, on the basis of international law, especially the principle of respect for the sovereignty and territorial integrity of states.

Such solutions would end suffering and make great contributions to peace, security and development in Europe and the world at large, he remarked.

The Vietnamese representative also requested relevant parties ensure security and safety for the expatriate communities living in Ukraine, including the Vietnamese community, and create favourable conditions for the evacuation of Vietnamese citizens to safe areas.

UN Secretary-General Antonio Guterres called for an end to the hostilities, and appealed for parties involved to protect civilians and respect international humanitarian law.

He added that the UN has allocated US$20 million from the Central Emergency Response Fund to assist humanitarian activities.

On March 2, the third and final day of the special session, the UN General Assembly is scheduled to vote on a resolution asking Russia to withdraw its troops from Ukraine. — VnExpress News