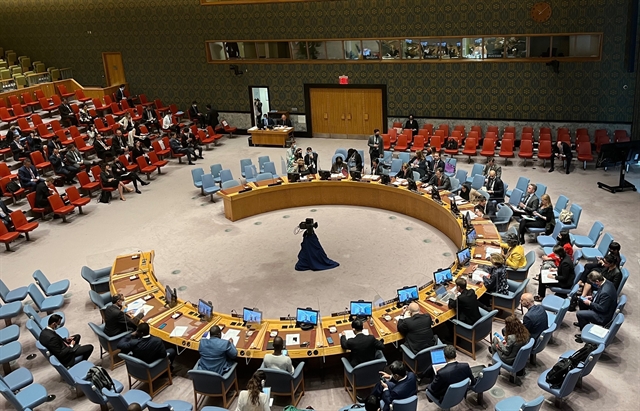 The UN Security Council debate was held on Wednesday (US time). — VNA/VNS Photo

NEW YORK — Vietnamese Ambassador Đặng Hoàng Giang underscored the critical importance of protecting civilians in armed conflicts while addressing an annual open debate on the issue at the UN Security Council (UNSC) on Wednesday (US time).

In his remarks, Giang, who is the Permanent Representative of Việt Nam to the UN, said the international community is facing major challenges to civilian protection such as wars and large-scale conflicts in many places and the complex COVID-19 situation, especially in conflict-hit areas. Those lingering problems have become even more complicated due to new crises, particularly the food crisis and supply chain disruptions.

Meanwhile, resources for the protection of civilians have been reduced as the international community has to reserve them for resolving new challenges.

He said the most important thing now is to pay due attention to protecting civilians in conflicts; urging the parties involved in conflicts to comply with the UN Charter, international law and international humanitarian law, including the UNSC’s Resolution 2573; and boosting countries’ sense of responsibility towards civilian protection.

He called on the international community to take urgent measures, increase humanitarian aid, and help increase countries and communities’ resilience to security challenges, including climate change.

In the long term, Giang stressed, it is necessary to step up the settlement and prevention of conflicts on the basis of enhanced cooperation between the UN, countries, regional organisations, and the private sector.

Việt Nam thoroughly understands war consequences and sympathises with armed conflicts’ losses and aftermath suffered by civilians, the ambassador noted, adding that it will keep contributing to common international efforts to protect civilians in conflicts.

At the debate, speakers voiced their concern that most of the recent casualties in armed conflicts are still civilians, with over 11,000 deaths in 2021 and 84 million others made homeless.

They also pointed out other worrying trends, appealing to the UNSC and the international community to help promote peaceful solutions to conflicts, ensure the parties involved in conflicts adhere to international humanitarian law, facilitate access to humanitarian aid, and properly handle infringements.

UNSC member states emphasised the need for stronger efforts and more practical actions to minimise civilian casualties and deal with urgent challenges like conflict-driven hunger. Many also highlighted the importance of complying with international humanitarian law and fully implementing UNSC resolutions, especially Resolution 2573 on the protection of objects indispensable to the survival of the civilian population. — VNS