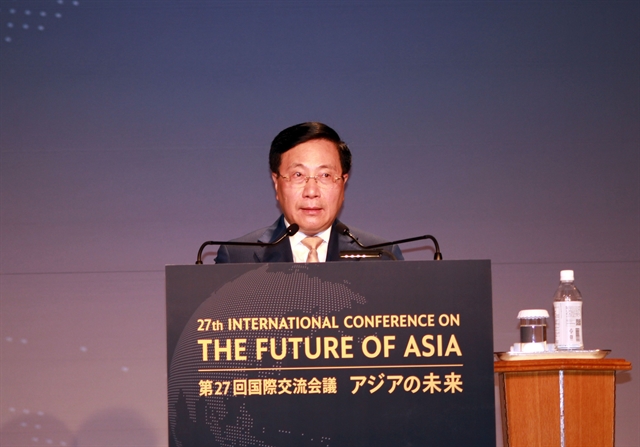 TOKYO — Deputy Prime Minister Phạm Bình Minh proposed that Asia strengthen its responsibility in keeping and creating a peaceful and sustainable environment for development and prosperity in the region and the world.

This should be based on cooperation, understanding, trust, and responsibility, he said, while delivering a speech at the 27th International Conference on the Future of Asia (FOA 2022) in Tokyo on Thursday.

He said, entering the third decade of the 21st century, the Asian region is witnessing profound historical changes, with both opportunities and challenges that have long-term impacts on future generations.

As the region and the world are focusing resources to handle urgent unprecedented issues, first and foremost, countries need to make responsible contributions, show mutual respect, and equally cooperate for mutual benefits, he said.

In the region, sovereignty disputes at sea continue to pose a threat to peace and security. Regarding the East Sea issue, it is necessary to settle disputes and disagreements by peaceful measures in line with laws, particularly the UN Charter and the 1982 United Nations Convention on the Law of the Sea (UNCLOS), promoting multilateral cooperation mechanisms and fully and effectively implementing the Declaration on the Conduct of Parties as well as soon finalising a substantive and efficient Code of Conduct, he said.

Deputy PM Minh also suggested that Asia need to pioneer in promoting multilateralism, a spirit of cooperation and connection in the direction of openness, inclusiveness, fairness, and sustainability.

“We need a global approach in dealing with increasingly urgent global issues, enhance cooperation and trust among Asian countries, improve the capacity to adapt to and be resilient to rapid changes of the situation,” he said.

“This is time for all countries to put aside their disputes and disagreements to unite and support each other.”

Unity in goals, solidarity, and drastic action are the foundations to overcoming challenges and achieving cooperation efficiency, he said. This is the common viewpoint of ASEAN member countries which is concretised by ASEAN’s activeness in promoting the partnership and cooperation and playing a central role with countries inside and outside the region in order to contribute to ensuring peace, security, stability, cooperation, and development while dealing with global development challenges, the deputy PM said.

In the era of globalisation, building a self-sufficient economy is not a closed economy but an open and integrated one with a harmonious combination of internal and external resources, he said. The effective implementation of free trade agreements, such as the Comprehensive and Progressive Agreement for Trans-Pacific Partnership (CPTPP) and the Regional Comprehensive Economic Partnership (RCEP) will create more motivation for the Asian economy’s recovery and growth. At the same time, it is necessary to set up and complete strategic infrastructure systems and promote human connection via tourism and cultural and social exchanges in order to tap opportunities from regional linkage, he said.

Additionally, Deputy PM Minh pointed to the need to make joint efforts in ensuring foundations to promote recovery and growth of countries and the Asian region, which helps to maintain the role of Asia as a key motivation for global development.

Stressing that as a leading region in digital technology and digital transformation, he said Asia needs to pioneer in initiating and promoting new motivations for development.

“Enhancing cooperation in the fields of science and technology and digital technology, including the development of digital government, digital economy, and digital society, is a motivation for Asia to develop in the post-COVID-19 period,” he said.

He also proposed that Asia continue to increase its integration and linkage with other regions and key partners in the world.

In his speech, Deputy PM Minh also acknowledged the role of Japan in the new era and the relationship potential between Việt Nam and Japan.

Việt Nam’s development orientation is to develop rapidly and sustainably based on science and technology, innovation and digital transformation and build a green economy and circular economy; putting people as the centre, the subject, the target, and the motivation for development; and implement social advancement and equality; and build a healthy and civilised society.

During the two-day conference, the political and economic leaders and scholars listen to the views of Asian leaders on regional and international issues. Panel discussions feature topics such as changing the world from Asia, developing Asian business through cultural exchange, the Russia-Ukraine conflict, and Asian security.

The Future of Asia is an international gathering where political, economic, and academic leaders from the Asia-Pacific region offer their opinions frankly and freely on regional issues and the role of Asia in the world.

The event, held every year since 1995 by Nikkei Inc, was canceled in 2020 due to the COVID-19 pandemic. It is considered one of the most important global conferences in Asia. — VNS