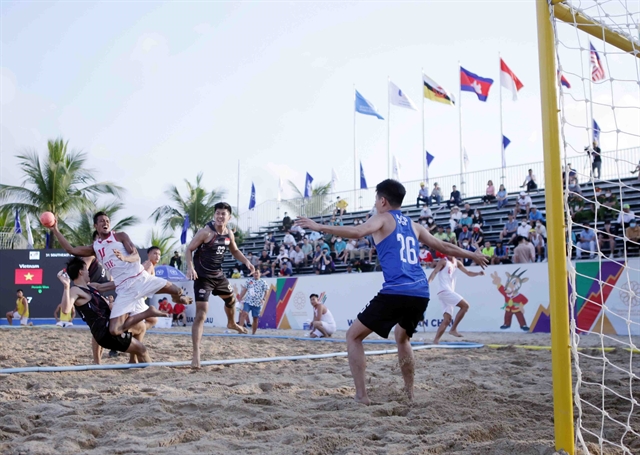 Having lost all four matches without winning a single half, not much hope was placed on the ‘David’ Singapore against the tournament’s ‘Goliath’ Việt Nam, who have won all three of their previous matches.

Just like the first leg, Việt Nam dominated the first period with an overwhelmingly attack, leading 7-0 before Singapore required a timeout for strategy changes.

However, these adjustments couldn’t prosper the Singaporean’s gameplay as the score rose 20-8, an even bigger gap than before the change.

It was only entering the second period that Singapore’s tactics took effect, creating a much more intense half that saw the scoreboard rapidly updated on both sides.

Despite their efforts, the visitor couldn’t narrow the gulf in class between the two teams as Việt Nam scored decisive points that helped the men in white finish the second period with a score of 17-14.

This was the fourth consecutive win for Việt Nam, making them the only undefeated team, having lost just one set. La Văn Lớn continued to prove himself as one of the best players in the tournament with another outstanding performance.

In the earlier game, the Philippines’ title hope continued with a 2-1 victory over Thailand. This was a vital win for the Filipinos, putting pressure on Việt Nam and pushing Thailand away from their gold medal dreams.

With three wins and one loss, the upcoming match against Việt Nam is a must-win for the Philippines if they want to win gold.

The SEA Games 31 men’s beach handball event is being held in a round-robin format with two legs. The gold, silver and bronze medalists will be decided on May 11, one day before the official opening ceremony.

Initially, there were five teams, Việt Nam, Thailand, Indonesia, Philippines and Singapore, but Indonesia withdrew at the last minute, leaving only four teams to compete.

They also pulled out of the women’s category, leading to the cancellation of this event. Their decision left only two teams, Việt Nam and Thailand, and regulations state a tournament can only take place with at least three teams.

The Vietnamese women could not compete at the SEA Games 31 but they recently won the Asian championship. They will be continental representatives at the world championship in Greece in June and the World Games in the US in July.

In the next match, Việt Nam will face the Philippines on May 10. If they win, Trịnh Huy Cường’s men will be crowned early champions.

All Việt Nam remaining matches of the tournament will start at 5 pm.