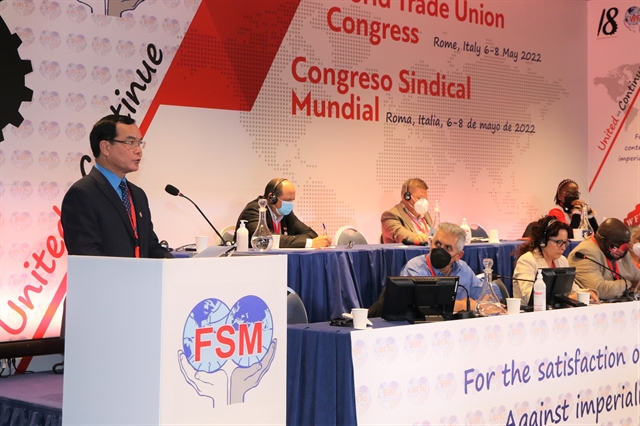 ROME — A delegation of the Việt Nam General Confederation of Labour (VGCL) attended the 18th congress of the World Federation of Trade Unions (WFTU) that took place in Rome, Italy, from May 6 to 8.

Opening the event that was participated by 435 delegates from 106 countries, WFTU General Secretary Georges Mavrikos highlighted the federation’s strong development in both quantity and quality over the past years, noting that since 2005, the WFTU membership has surged by 175 per cent to over 105 million in 133 countries, making it the world’s largest organisation of trade unions.

He said he also valued Việt Nam’s contributions to maintaining and strengthening the WFTU’s role in the fight for the interests of workers around the world.

In his speech, VGCL President Nguyễn Đình Khang stressed the importance of solidarity and unanimity in the progress of the working-class and global trade unions.

He said the WFTU formation and development was “a vivid demonstration of workers’ solidarity to build a world of peace, stability, equality, friendship, cooperation, and common development,” adding that the VGCL would always be an “active and responsible member and stand side by side with other WFTU member organisations.”

During the COVID-19 pandemic, the VGCL has focused on assisting pandemic-hit workers, proposing aid packages and priority policies for frontline medical workers, stepping up vaccination, and ensuring the delivery of insurance benefits, affirming trade unions’ role and sense of responsibility towards members and workers.

In addition, the VGCL has also supported the WFTU’s call for engagement in international activities against the pandemic.

The 18th WFTU congress was the second of its kind to be held in Italy, after the first in 1949.

During the event, participants discussed issues related to the difficulties facing the working class worldwide amid the COVID-19 pandemic and the Ukraine conflict. — – VnExpress News