NA Chairman meets Vietnamese entrepreneurs from across Europe in Hungary 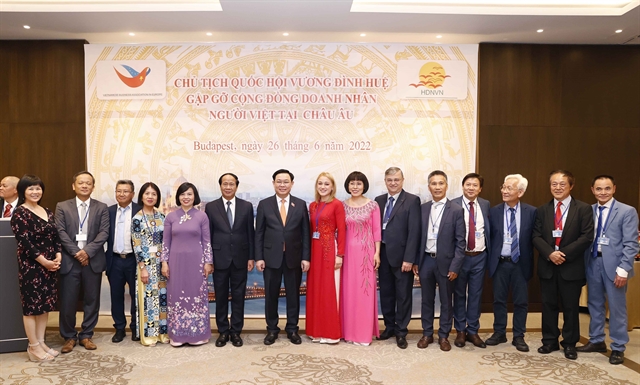 Hoàng Mạnh Huê, president of the Union of Vietnamese Business Associations in Europe, said that the community has made great strides in recent years with encouraging successes, and become an effective bridge between the Vietnamese and European markets.

They not only import a lot of commodities from Việt Nam into the European market and the supply chain of businesses in the host countries but also have been very successful in building a stable and efficient business model in accordance with the host countries’ laws, Huê added.

The Vietnamese business community in Europe has deeply integrated into local economic activities, successfully building valuable Vietnamese brands, including a brand that is valued at up to US$500 million.

In the face of the global instability, the business community has realised that it is necessary to link up together more closely to find new solutions and opportunities for stability and growth opportunities in new directions, Huê noted.

NA Chairman Huệ said that Vietnamese enterprises in Europe play an important role in introducing and selling Vietnamese products and developing distribution channels for them in foreign markets.

The establishment of the Union of Vietnamese Business Associations in Europe is a vivid demonstration of the Vietnamese people’s solidarity no matter where they are in the world, the top legislator said.

The Party and State appreciate the coordination of the overseas Vietnamese community, with the entrepreneur association playing a core role, in helping Việt Nam fight the COVID-19 pandemic, including vaccines support, he said.

Activities of Vietnamese enterprises in Europe and around the world not only contribute to the host country’s economy, but also act as a bridge between the economies of other countries and that of Việt Nam.

Last year was particularly devastating due to COVID-19, but according to statistics, there were about $18.1 billion in remittances sent to Việt Nam, of which a large part is the income of Vietnamese businesses around the world.

Informing participants on the domestic situation, the NA Chairman stated that Việt Nam is among the few countries that have overcome crises induced by COVID-19, with socio-economic activities well on the way to recovery.

Việt Nam’s GDP growth in 2021 reached 2.58 per cent, but in the first quarter of 2022 the growth figure has hit 5.03 per cent, he noted, adding that the stimulus package is being disbursed and more measures are being mulled to combat risks of inflation from rising fuel prices.

He affirmed that the Party and State always pay attention to and consider the overseas Vietnamese community as an integral part, a resource of the ethnic community and an important factor contributing to strengthening the cooperation and friendship between Việt Nam and other countries. — VNS