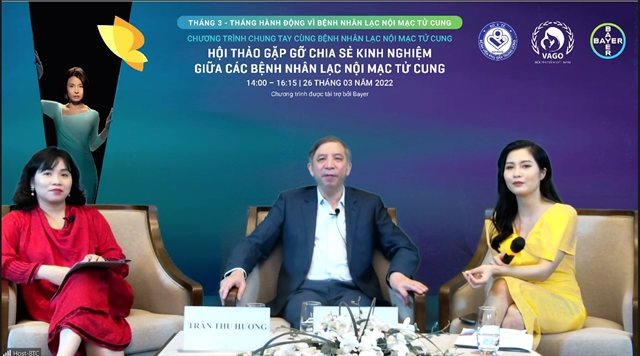 HÀ NỘI — A seminar titled ‘Patient Campaign for the Anniversary of Endometriosis Awareness Month’ was held to raise awareness of and educate the public about disease.

The seminar, organised by Bayer Vietnam, the Vietnam Association of Gynecology and Obstetrics (VAGO) and the National Hospital of Obstetrics and Gynecology (NHOG), was held to support the Endometriosis Awareness Month (EndoMarch).

It was attended by leading medical experts like Associate Professor Vũ Bá Quyết, vice president of VAGO and Surita Morgan, president of the Malaysian Association of Endometriosis Patients.

Available online, the seminar gave thousands of patients across the country the chance to connect, share their stories and encourage one another to deal with the disease.

Endometriosis is a recurring and persistent disease in women characterised by the presence and growth of endometrial tissue outside the uterus which undergoes menstrual-cycle-driven proliferation and breakdown.

The blood produced is trapped at the site of lesion and can trigger local inflammatory reactions.

There is no cure for endometriosis and treatment of aims to relieve pain, slow the growth of endometriosis, improve fertility (where desired), and/or prevent the disease from recurring after successful treatment.

At the seminar, Dr Quyết also discussed the merits of drugs and surgery in treating endometriosis: “Internal medicine is the optimum solution. Only when this route fails should surgery be performed due to the serious risk of further complications, in the case of ovarian endometriosis, of infertility.”

“Patients also need to be aware that surgery is not a cure. The disease will return – slowly or swiftly, depending on each case – and women must mentally prepare themselves and continue seeking medical consultation.” he added.

Trần Thu Hương, the administrator of a Facebook community of 4,000 endometriosis patients, said: “I’ve been living with endometriosis for over 15 years and have gone through many of the hardships affecting patients.

“When I learnt that I am not alone – one out of every 10 women suffer from endometriosis, that’s 200 million women in the world – I created a Facebook group where we can share and support each other. There is little reliable information about this disease, even though better understanding can help patients deal with its daily implications.

“Patients hope that doctors and the health system will pay more attention to women with endometriosis as this is a chronic pathology and women are severely affected by this disease in terms of physical and mental problems and the burden of the cost of treatment. A lot of women with endometriosis suffer from depression from the pain of the disease, which makes their young lives extremely difficult.”

In the lead up to Endometriosis Awareness Month in Asia, Bayer, together with clinical experts from across the region, has unveiled a new consensus guideline: ‘Clinical Diagnosis and Early Medical Management for Endometriosis: Consensus for Asia.’

The first-of-its-kind consensus aims to help healthcare professionals navigate clinical diagnosis for the treatment of endometriosis.

The consensus aligns with the 2022 guidelines published by the European Society of Human Reproduction and Embryology (ESHRE), which details the best practices for caring for women with endometriosis.

Both emphasise the importance of non-invasive procedures in early diagnosis and treatment to allow for patient-centred care.

“With up to 10 per cent of women of reproductive age worldwide affected by endometriosis, it continues to pose a serious burden globally and in our region,” Catherine Donovan, vice president of medical affairs Asia-Pacific, Bayer Pharmaceuticals Asia-Pacific, said.

“As such, we are excited to see the outcomes of the Asia Consensus guidelines which allow us to help healthcare professionals tackle the endometriosis burden by improving diagnosis and treatment standards of the condition in Asia, enabling them to create the best outcomes for their patients.”

Bayer aims to address the information gap persisting about this condition to help women detect irregularities and encourage them to seek early treatment.

With this goal, Bayer has spearheaded a campaign called #DontLiveWithPain to encourage women to seek intervention and treatment early, instead of suffering the debilitating pain in silence, believing that it is normal.

EndoMarch was first launched in the USA and was extended into a global campaign in 2014. The overall goal of the month is to raise public awareness of the disease.

#DontLiveWithPain was launched in Asia to raise awareness, educate and assist modern-day women in understanding and managing endometriosis. — VnExpress News