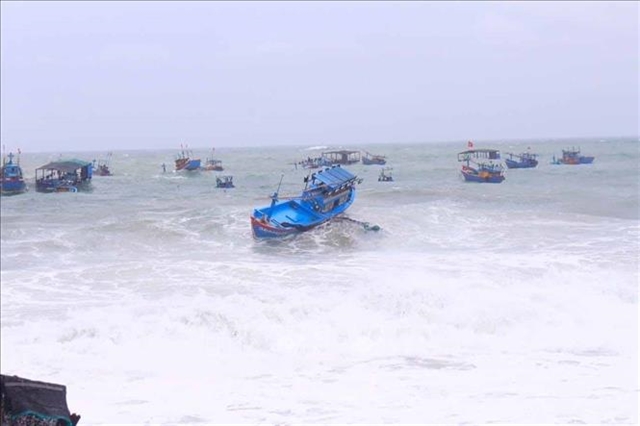 Heavy rain and big waves have battered the the central province of Bình Định over the last few days. — VNA/VnExpress News Photo

HÀ NỘI — Unseasonal downpours have been lashing the central provinces for the last two days, causing two deaths and two more to go missing at sea.

According to the Standing Office of the National Steering Committee for Natural Disaster Prevention and Control, unseasonal rain and storms have been seen on a large scale from the coast, land and mountainous areas since Thursday.

By Friday morning, the central provinces from Thừa Thiên Huế to Khánh Hòa saw heavy rain from 200 to 300mm. In Thừa Thiên Huế, rainfall was up to 473mm in some places.

This time of year is usually the beginning of the dry season in the central region. The rainy season is usually from September to November.

Heavy rain was accompanied by thunderstorms on land and coastal areas,  as well as big waves off the coast of Thừa Thiên Huế and Phú Yên provinces. The strongest winds were measured at level 8 (62-74 km per hour) in Nhân Lý, Bình Định Province.

Unseasonal rains and floods on a large scale have caused heavy damage in the central provinces. As well as two dead and two missing, two houses have collapsed, 37 had their roofs blown off and 176 small ships and boats sunk.

In the central province of Phú Yên, 2,450 lobster cages were damaged. Agriculture on land hasn’t been spared either; 13,484 hectares of rice and 292 hectares of crops have been flooded. Estimates of the total value of the damage are still underway.

Trần Quang Hòai, director of the General Department of Natural Disaster Prevention and Control under the Ministry of Agriculture and Rural Development, said that unseasonal rains and floods in the central region in recent days were dangerous weather conditions on a large scale, as up to eight provinces were affected.

“This unseasonal flood also warns of a complicated and intense stormy season this year,”  Hoài said.

The Standing Office of the National Steering Committee on Natural Disasters Prevention and Control issued three consecutive documents directing the central provinces and the Central Highlands to prepare for bad weather after receiving forecasts and warnings from the National Center for Hydro-Meteorological Forecasting in the last days of March.

Warnings were also sent via Zalo to people in the at-risk areas.

Hoài said that such unseasonal weather could continue in the coming days and urged swift support for people in affected areas.

He asked localities to directly support people, particularly in rescuing boats and helping those in flooded areas.

Thành asked the Department of Agriculture and Rural Development to coordinate with localities to count lost crops and support farmers.

Agencies were also asked to review locations and residential areas that are prone to landslides, follow weather forecasts and monitor reservoirs to avoid flooding downstream.

Trần Hữu Thế, Chairman of the People’s Committee of Phú Yên Province – the hardest hit by the unseasonal rain – said that aquaculture cages are usually safe at a depth of 10-15 metres during storms. However, this time it wasn’t deep enough.

“Underground currents are more destructive than other storms that Phú Yên has ever encountered,” he said.

Regarding other crops and flowers, it is estimated that the province lost about 30 per cent of rice yield. The total initial damage caused by natural disasters was estimated at VNĐ171 billion.

Hồ Quang Bửu, vice chairman of Quảng Nam’s Provincial People’s Committee, proposed that the central Government send a working delegation to the localities to inspect and survey the damage.

According to folk experience, it takes about 60 years for a major disaster like this to reappear.

“We need to study it carefully and take appropriate response measures,” he said.

On Friday, the People’s Committee of Bình Định Province made a plan to salvage fishermen’s boats that were sunk by the rains and rough seas.

Divers would help to locate and mount salvage equipment. Trucks will pull the sunk boats to shore.

The Provincial People’s Committee planned to give each VNĐ5 million for sunken vessels under 20 CV and VNĐ15 million for ships and boats from 20 CV to 50 CV. —VnExpress News