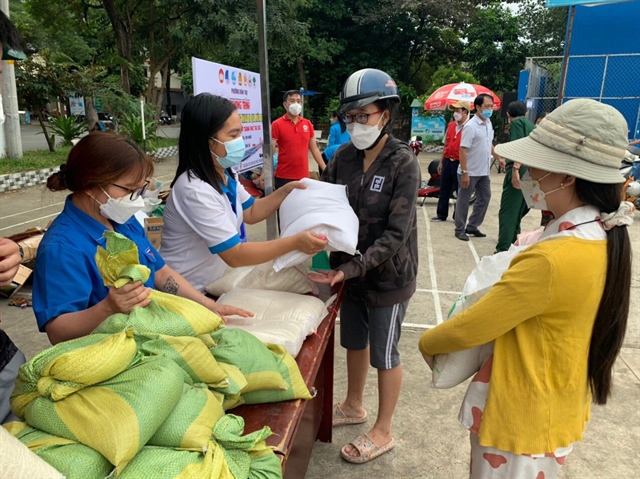 Local residents in HCM City’s Thủ Đức city can get 1kg of rice for each kg of recyclable items.  — Photo: tuoitre.vn

It has received an enthusiastic response from locals and become one of Thủ Đức City’s several practical programmes on supporting people in need during the COVID-19 pandemic.

Lê Hữu Nghị, chairman of Bình Thọ Ward’s People’s Committee, said that instead of setting up a rice ATM offering free rice only, the ward’s authority encouraged locals to exchange recyclables for rice.

“Besides taking care of people’s lives during this tough time, we call on everyone to clean up the environment and encourage plastic waste recycling,” he said.

Residents can get 1kg of rice for each kg of recyclable items.

The exchange has attracted both adults and children.

“People with stable incomes have also brought their garbage just to exchange for the joy, of it,” Nghị said.

They want to contribute to environmental protection, sorting garbage and depositing it in the right places for recycling instead of being indiscriminately discarded.

So far local authority has presented around two tonnes of rice to the needy.

It also means about 2 tonnes of recyclable items have been collected since the exchange was organised for the first time in November last year.

The recyclable items will be sold to the city’s urban environment unit to raise local funds for taking care of needy residents during the Tết (Lunar New Year) holiday.

Multiple ‘zero-đồng’ clothing stalls have been set up near the rice ATM, allowing locals to pick the clothes they like without having to pay any fee, Nghị said.

This model was also rolled out in District 1 in September last year.

Each people can exchange a maximum amount of 10kg of waste. More than four tonnes of rice have been mobilised for the programme so far.

“Along with rice, residents can get other necessities like cooking oil and salt and plants.”

Not only residents in District 1 but also those in other districts can also join the exchange, she said.

Another successful community-based model on cleaning up the local environment and recycling products the ‘5+1’ model in Thủ Đức City’s Linh Trung Ward.

The model brings five neighbouring households together as a group to keep the community clean and safe.

They work together to sweep residential streets, roadsides and main roads early in the morning every day.

The groups remove litter, rubbish, waste bottles and tires to help keep the streets clean and prevent dengue fever and other infectious diseases.

Việt Nam is one of Asia’s five worst polluters of ocean plastic waste, according to international organisations.

With around 13 million tonnes of waste released into the ocean every year, the country ranks 17th in the world for ocean plastic waste pollution.

Although there are no official statistics on the amount and varieties of plastic in the Vietnamese sea and islands, plastic waste is easy to be seen in waters, with the country’s 112 estuaries the main gateways of plastic to the ocean.

Statistics from Viet Nam’s Association of Plastic illustrate the scale of the problem. In 1990, each Vietnamese consumed 3.8kg of plastic per year, but 25 years later the figure hit 41kg.

As many as 1,000 plastic bags are used each minute but only 27 per cent of them are treated and recycled.

The Ministry of Natural Resources and Environment estimate that about 80 tonnes of plastic waste and bags are thrown away every day in two of the country’s biggest cities Hà Nội and HCM City. — VnExpress News