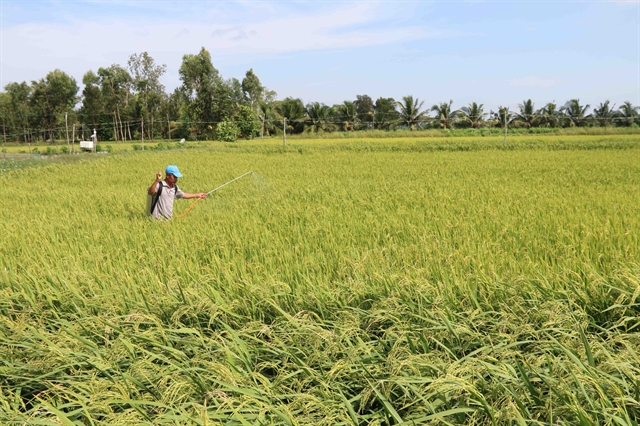 TRÀ VINH — The Cửu Long (Mekong) Delta province of Trà Vinh will assist farmers in restructuring crops on a total area of 1,400ha this year to help them earn higher incomes.

The 1,400ha are unproductive sugarcane and rice fields and orchards.

The provincial Department of Agriculture and Rural Development will help the farmers switch to annual crops on 760ha and perennial trees on 400ha. The remaining area will be used to intercrop rice and aquatic species or breed only aquatic species.

It will survey soil conditions, irrigation systems and embankment systems in each locality to advise farmers on their switch to crops and animals with high value and demand.

Local farmers switched from rice to other crops and aquatic species on 2,335ha of unproductive lands last year.

Trà Cú District, the province’s largest sugarcane producer, has been successful in converting sugarcane lands, with farmers earning high incomes after the switch.

Huỳnh Văn Thảo, head of the Trà Cú Bureau of Agriculture and Rural Development, said nearly 4,000ha of the district’s 5,000ha of sugarcane were converted in the last four years.

Most farmers switched to fish, vegetables, coconut, and grass for feeding cows, earning at least VNĐ100 million ($4,400) per hectare per year, he said.

It has zoned areas for various crops and animals in each locality based on soil and other conditions and market demand.

It is implementing support policies for restructuring agricultural production in 2021-25.

Under them it will spend VNĐ370 billion ($16.3 million) to help farmers to buy equipment and machinery.

It is also helping them apply good agricultural practices (GAP) standards including in aquaculture to produce quality products for domestic consumption and exports.

The provincial Department of Agriculture and Rural Development is taking measures to help farmers and agricultural co-operatives expand their area under organic rice and build brand names for the grain.

Phạm Minh Truyền, director of the department, said under its agricultural restructuring plan, the province plans to develop concentrated high-quality rice growing areas, including 2,500ha of organic rice, by 2030.

The organic rice farms will mostly be in Châu Thành, Trà Cú and Cầu Ngang districts.

The department and local authorities would train farmers in techniques like ‘three increases – three reductions’ and ‘one must and five reductions’ to increase yields and incomes, he said.

‘One must and five reductions’ refers to using certified seeds and reducing the use of seedlings, plant protection chemicals, nitrogenous fertilisers, irrigation, and post-harvest losses.

Farmers are also encouraged to use other techniques like the use of smart fertilisers and System of Rice Intensification, which require less water and other inputs but provide higher yields.

The province is helping agricultural co-operatives develop brand names and improve packaging of their products and promote them.

Its Department of Science and Technology is assisting the Tiến Thành Co-operative in Châu Thành District with building a collective brand name for organic rice planted in its Long Hoà and Hoà Minh communes.

The two communes planted 61ha of organic rice in the 2021 autumn-winter crop, the year’s third.

Trương Kính Hoa, head of the Châu Thành District Bureau of Agriculture and Rural Development, said the two communes should be able to expand their organic rice cultivation area to 200-250ha.

The members of Hiệp Long Agricultural Co-operative in Trà Cú District, established in 2018, have 130ha under organic rice.

The co-operative is focusing on promoting its Hạt Ngọc Rồng rice, which has been recognised as a four-star OCOP product under the country’s one commune – one product (OCOP) programme.

The brand is now sold on many e-commerce platforms, retail food chains and stores that sell OCOP products.

Trần Minh Thuần, director of the co-operative, said it has received VNĐ600 million ($26,400) in subsidies from the central and local governments to invest in machinery, facilities and a processing plant, VNĐ120 million ($5,300) for buying seedlings and VNĐ300 million ($13,200) for building its brand and carry out trade promotions.

The co-operative has 76 members whose incomes increased by VNĐ1.8 million ($80) per hectare per rice crop since enrolling. — VnExpress News