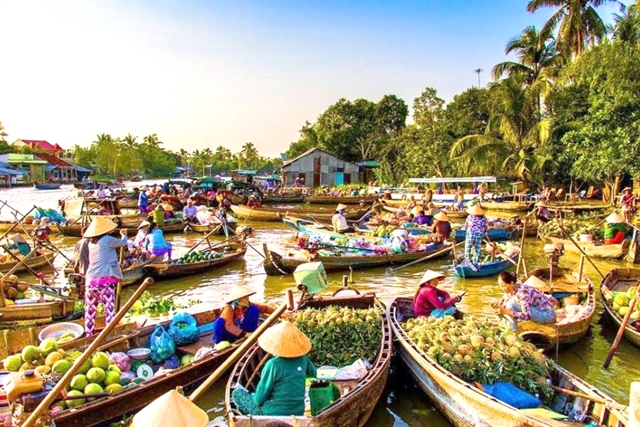 HCM CITY – Tourism connections between HCM City and the Mekong Delta have been rebooted as soon as Việt Nam opened up fully to foreign tourists, experts say.

They also said at a recent conference in Bạc Liêu Province that it was necessary to further boost tourism cooperation between HCM City and the 13 provinces and cities comprising the Mekong Delta.

Participants noted that even though the tourism scene in Bạc Liêu had “frozen” due to the drastic impacts of the COVID-19 epidemic, it had revived soon after the situation improved and Việt Nam shifted its strategy to living safely with the novel coronavirus.

Of the province’s 15 tourism spots, Bạc Liêu hosts eight of nine that are recognised by the Mekong Delta Tourism Association as prominent destinations. With such potential, tourism revival in the province will continue strongly, conference speaker said.

“In addition to raising many species of fish for visitors to take photos of, I have planted more flowers and expanded the accommodation space. Since foreign guests prefer spending time in the kitchen and sleeping on the raft, I have also rearranged existing furniture and cleaned up these areas,” Bon added.

Trần Hiếu Hùng, director of the Cà Mau Department of Culture, Sports and Tourism, said a programme called “Cà Mau, a destination in 2022” has been launched to introduce and promote the potentials and strengths of the southern most province in the country.

He said this provides an opportunity for relevant authorities to build strong tourism connections between Cà Mau and neighboring provinces as well as the Mekong Delta and HCM City.

Visitors to Cà Mau in this year will be able to experience shell races on the Đất Mũi mudflat, sail on the Cái Tàu River and even participate in the record-setting ceremony for the largest beehive in Việt Nam, apart from enjoying delicious seafood including the the best sea crab in the South, he said.

Võ Tiến Thành, director of the province’s Centre for Trade, Tourism and Investment Promotion, said that Đồng Tháp would continue to promote digital transformation of businesses, households and communities alongside developing a new tourism model and making a digital tourism map.

“We have also restarted the tourism stimulus linkage programme with the Central region, the Central Highlands and northern provinces while participating in the VITM Hà Nội International Tourism Fair and promoting the lotus festival, among other activities,” Thành said.

A report by the HCM City Department of Tourism on the results of a 2019-2022 tourism development cooperation programme between HCM City and the Mekong Delta said it has been implemented effectively and inspired businesses including start-ups.

Since HCM City is identified as a tourism gateway, it is necessary to create attractive products that will draw in more tourists, she said.

Trần Đoàn Thế Duy, general director of the Vietravel Tourism Company, said that linkages between localities, including the one between HCM City and the Mekong Delta, have contributed to unifying regulations on epidemic prevention and facilitating tourism.

However, though tourism products in each locality in the delta have improved in quality, they are relatively repetitive, Duy said, adding that was necessary to boost the tourism uniqueness of each place.

Survey conducted within the conference’s framework have helped businesses improve the quality of tourism services in certain destinations; therefore, more feedback was necessary to make them more meaningful to domestic and international tourists, he added. – VnExpress News