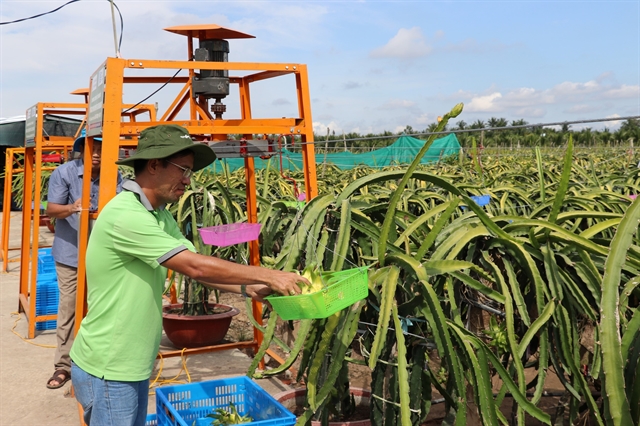 They are mainly in Chợ Gạo, Tân Phước, Gò Công Tây, and Gò Công Đông districts, with the last-mentioned accounting for nearly 7,500ha.

Chợ Gạo dragon fruit has been granted a collective brand name by the National Office of Intellectual Property.

Tiền Giang, the country’s largest fruit producer, has identified dragon fruit as one of its speciality fruits for its competitive advantages and high export value.

It has taken a number of measures to improve the competitiveness of speciality fruits and ensure they have steady outlets.

Nguyễn Văn Mẫn, director of the province Department of Agriculture and Rural Development, said a programme that began in 2017 “focuses on using technology to increase the quality and competitiveness of dragon fruits in export markets.”

The department has organised forums to teach farmers intensive farming techniques under the project.

The techniques include growing the fruit on trellises, making and using organic fertilisers, installing automatic spraying systems, and pruning branches.

Farmers have also been instructed in integrated pest management, to grow the fruit to good agriculture practices (GAP) standards and develop co-operatives.

The Southern Fruit Research Institute in its Châu Thành District has created several new dragon fruit varieties that have become popular in both the domestic and export markets.

All dragon fruit growing areas are lit at night with compact electric bulbs to induce flowering, some 73 per cent of lands are equipped with drip irrigation facilities and 500ha have trellises to improve yields and quality.

The province had established 11 co-operatives, which are strengthening linkages between stakeholders in dragon fruits value chains, he said.

They had been granted production codes for 125 areas with a total of 6,800ha to export to China, the US, Japan, South Korea, Australia, and other markets.

The Mỹ Tịnh An Dragon Fruit Co-operative in Chợ Gạo District is one of the leaders in growing the fruit, besides vegetables and other crops, to GlobalGAP standards, with its 250 members having 300ha.

Võ Chí Thiện, its director, said its products met quality standards in the EU, the US, Australia, and China.

Lê Văn Thuỷ, a member, said the co-operative guaranteed outlets for his GlobalGAP – standard dragon fruit, buying it at a price of VNĐ10,000 a kilogramme higher than market rates.

He said he felt secure about growing the fruit.

The province exports 80 per cent of its dragon fruit output to China, the US, the EU, Japan, and South Korea, and overall exports are worth US$100 million a year. – VNS