This doesn’t happen every day: weird 2022 stories from Vietnam

From what they drink to how they drive or dance, unique Vietnamese people have created real-life stories that sometimes appear stranger than fiction.

In January, Da Nang City Police arrested 32-year-old Luu Manh Tuan for stealing VND1.1 billion ($48,458) from his mistress and giving it to his wife.

Back in December 2021, Tuan was already married but met a 31-year-old woman named Hoa online. After two weeks of chatting, Hoa, who lives in the northern province of Yen Bai, fell in love with Tuan and they agreed to meet in Da Nang.

They stayed at a hotel in Thanh Khe District. During this time, Hoa opened an online bank account and deposited over VND1.1 billion.

Tuan watched Hoa open her account and remembered the details, including her password. He then borrowed her phone, saying he needed to download an app. Hoa gave it to Tuan and then went to bed.

Tuan then logged into her account and sent all the money to his wife. He said his wife used VND185 million to pay off debts, put VND500 million into a savings account and withdrew VND443 million in cash.

The next morning, Tuan told Hoa he had to go to a doctor’s appointment. When he never returned to the hotel, Hoa got suspicious. When she checked her bank account, she was locked out and her original password had expired.

When Hoa visited the bank on Jan. 6, she was informed that her money had been transferred to another account. She then reported the incident to police.

In April, a 28-year-old man named Nguyen Van Tung in the Central Highlands town of Buon Ma Thuot was getting ready to leave for work when he found that his car was missing all its wheels and had been placed on piles of bricks.

In his complaint to police, he said he had always parked the vehicle outside his house.

“[I have] been doing so for around six months now and did not imagine someone would steal its wheels.”

Cool off with a drink of car coolant

A married couple in Hanoi were hospitalized in May after they mistook two cans of car coolant for beer and soda.

They said an acquaintance had given them two cans, one red one green. Thinking that the green one was beer and the other coke, they drank the liquids inside. Only when they experienced no taste from the fluid did the couple check the labels and realize they had drunk car engine coolant.

The 108 Military Central Hospital admitted them for emergency aid and had their stomachs cleaned.

They remained hospitalized for three days before release.

In May, a woman in the southern Can Tho City went viral after a video of her dancing next to a moving plane at Phu Quoc Airport was posted online.

Three months later, the Civil Aviation Authority of Vietnam issued a decision to ban her from flying on both domestic and foreign airlines until February 16 next year.

The authority reported that the woman, whose identity was not revealed, flew from Phu Quoc to Can Tho on May 18 and had indulged in “disruptive behavior.” It said she “did not comply with aviation safety and public order regulations.”

She was also fined by the Southern Airports Authority for not complying with airport security personnel’s instructions.

Furious, but not so fast

In October, Ma Van Tang, 33, was arrested by police in the northern province of Thai Nguyen’s Phu Luong District for “robbery.”

Tang booked a taxi in the province and when it reached an isolated area, he pulled out a knife and held it against the driver’s throat, demanding money.

The driver pushed away the knife, kicked the door, got out, and escaped, suffering only minor injuries to his face and neck.

Tang then moved to the driver’s seat and attempted to take the car. But since he did not know how to drive, he got caught.

One car at a time

In October, security camera footage showed a 5-seat car in the central beach town of Nha Trang ramming into four other cars parked on Pasteur Street at night. Like dominoes, each car subsequently hit the next.

Three other cars were also impacted by the collision. There were no casualties. 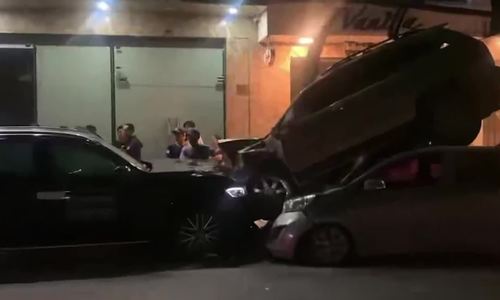 This doesn’t happen every day: weird 2022 stories from Vietnam