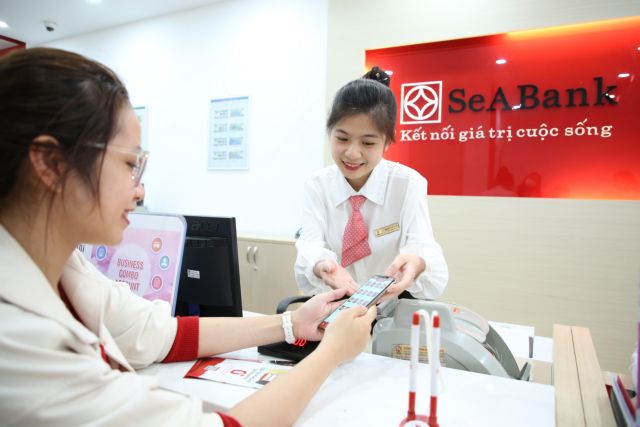 A customer conducts a transaction via app at a SeABank branch. — Photo courtesy of SeABank

HÀ NỘI — Moody’s announced it would raise the baseline credit assessment (BCA) from B2 to B1 for Southeast Asia Commercial JS Bank (SeABank) in the 2022 rating review period.

At the same time, Moody’s continues to keep SeABank’s issuer and long-term deposit rating at B1 for the fourth consecutive year with a positive development outlook.

Moody’s upgrade of BCA to B1 reflects the marked improvement of the bank’s intrinsic strength in asset quality, profitability and capital.

The assignment is proof of the efforts of the bank in maintaining stable business operations, improving asset quality, profitability and capital last year with outstanding business results.

SeABank is currently in the group of important banks in the banking system according to the regulations of the State Bank of Việt Nam, voted by the Việt Nam Banks Association as “Exemplary Bank for the Community 2021″ and services in 2021” and is the only bank to be honoured by The Banker (UK) as ” Bank of the Year Việt Nam 2021″ and ranked among “Top 50 best growth enterprises in Việt Nam 2022” by Việt Nam Report. — VnExpress News