‘The old garbage man’ cleaning up Hội An 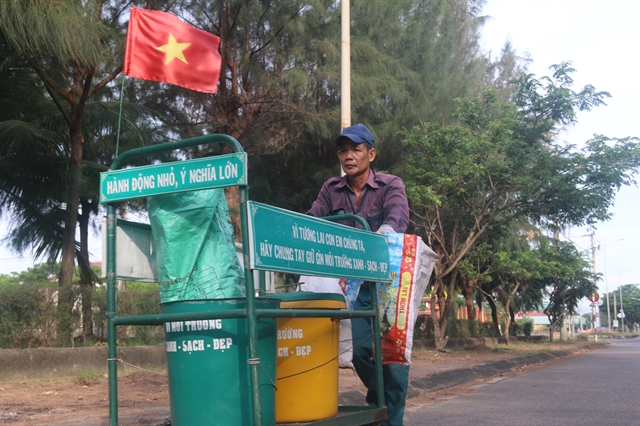 Nguyễn Thương with his special vehicle for daily rubbish collection in Hội An City. — Photo toquoc.vn

QUẢNG NAM — Locals in Hội An City, central Quảng Nam Province, are used to seeing the old man with a trolley walking along the roads and beaches every day to pick up rubbish. He has become something of a local celebrity.

Nguyễn Thương, 62, a resident of Phước Trạch Street, Cửa Đại Ward, is affectionaly known as “the old garbage man” by locals. He has been quietly working as an unpaid rubbish collecter for more than six years.

Thương said that about seven years ago he suffered a stroke while working as a chef at a hotel in Hội An, which took away his hearing and partially paralysed his limbs.

The hospital became his home for more than six months, and the doctors became like relatives. But the illness did not improve, and his family had to take him home to take care of him.

However, he refused to surrender to fate and constantly made efforts to improve his health.

“The doctors told me that lying in one position for a long time could make my limbs completely paralysed,” Thương told Tổ Quốc (Homeland) newspaper.

He set soon about practised standing, walking and grasping the smallest things he could, like a child.  Despite the physical pain, he refused to give up. After a short while, he could walk normally and regained his hand grip.

From then on, he believed he needed to do something to say thanks for his recovery. And so the rubbish collecting began.

Every time he went out to exercise, he would pick up plastic bags and face masks thrown indiscriminately along the road. In the first days of doing the work, he tried to keep a low profile, not wanting people to become aware of his quiet dedication. However, his work was soon exposed.

His wife and daughters tried to convince him to stop as they were worried about his health, but he refused.  Lê Thị Bảy, Thương’s wife, remembers the first days he left home to pick up rubbish.

“Every day, I woke up and saw him in wet clothes. I thought he went out to do morning exercise. I advised him to stop picking up the rubbish, but he would not relent,” she said.

Understanding his wish and seeing his health improve, his wife and children gradually accepted his work.

“My father’s health improved a lot when he went out to do exercise and pick up the trash. Dad is working to help society, and we are very proud of him,” Nguyễn Xuân Phương, Thương’s daughter, said.

For the past six years, Thương has been going along the roads and alleys to collect rubbish almost every day.

He also helps the elderly or nearby school janitors to clean houses and schools, or do repairs.

With the money saved from rubbish collecting, he has even bought a pushcart and a bicycle to serve his work.

“Every day, I use the trolley to pick up the trash and ride my bike when I’m unwell. I’m sad if I can’t collect rubbish for even one day,” he said.

On his trolley, he also hangs banners encouraging others to protect the environment. They carry upbeat slogans such as “For the future of our children,” “Let’s join hands to keep hygiene, and green – clean – beautiful environment,” or “Small action, big meaning.”

At first, people said he was crazy when he reminded them not to litter the streets and didn’t understand what he was doing. But later, they began to support him, helping him keep the city clean.

Since suffering the stroke, he has been deaf in one ear and has to use a hearing aid in the other. He also has to take medicine every day. But he does not feel sorry for himself.

Lê Công Sỹ, head of Cửa Đại Ward’s People’s Committee, said the committee tried to support him with some money for his efforts, but he flatly refused.

“I’m happy to do this to help the city become more clean and beautiful. I don’t expect any reward. I will do this job for free until my legs can’t walk and my hands can’t pick up rubbish any longer,” Thương said. — VnExpress News