The ‘lonely’ man who helps fix motorbikes for free 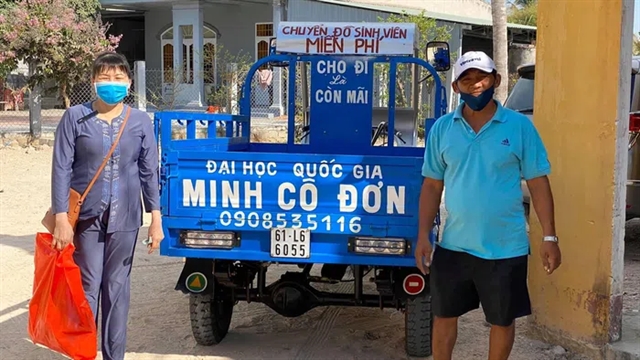 HCM CITY For almost a quarter of a century, Nguyễn Văn Minh has been fixing motorbikes and bicycles for free.

You’ll find him close to HCM City’s National University, ready to provide a helping hand to students and people on low income.

At the age of 60, Minh should be enjoying his twilight years taking things easy. But instead you’ll find him standing on a street corner below a sign that simply states: “Free repair”.

Known as ‘Lonely Minh’ because he has no wife or children, he spends his days patching or replacing tyres, helping people who have ran out of petrol, and one night he even helped a woman who had been robbed.

Even though people often offer to pay, Minh refuses to take any payment.

“Students don’t have much money,” he said. “I can help them with my ability, it is a way I can share some of their difficulties.”

“Sometimes when I fix vehicles for poor customers, the tyres are expensive so I give it to them for free.”

Minh has no home of his own, and is currently living in an abandoned building in Bình Dương’s Dĩ Anh Town.

He once sold his motorbike, his most valuable possession, in order to buy more tools to help people fix theirs.

Now he has a cargo tricycle, and transports goods around for people, refusing to give them a set price, and instead just receiving donations of whatever they can afford.

He even patrols the neighbourhood at night where he lives, helping provide secure and keep watch as many residents had been robbed recently.

But it’s his free repair service that has earned him love and respect for all those people he helps.

You’ll find him in Linh Trung Ward, Thủ Đức District and Dĩ Anh Town, Bình Dương Province, always with a smile on his face waiting for the next person who needs his help.

Everyone in the area knows ‘Lonely Minh’ and despite being alone, he does have plenty of friends who he has helped over the years.

“Because I have no wife, no children, no house, I’m alone all day, that’s why people call me that,” he said.

He might think he’s alone, but everyone he has helped regards him as one of their very good friends.  – VnExpress News