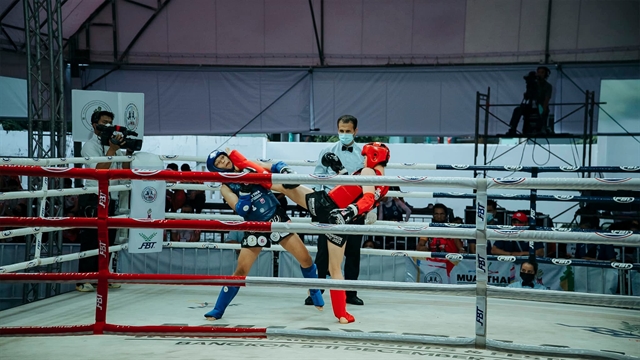 HÀ NỘI Winning national tournaments in four different martial arts disciplines is no big deal for Bàng Thị Mai. On top of that, she has added a gold medal from the Muay Thai World Championships, held in Thailand in December, to her collection.

The ethnic minority fighter gained fans across the country when she won gold at the World Muay Thai Championships in December in the women’s U23 Elite 60kg class.

It is a dream come true for the martial arts lover, who has promised to contribute her best to combat sports.

“It was my first World Championship. I was excited to take part in such a big tournament and I trained hard for my debut,” Mai told Việt Nam News.

Mai took two easy wins to advance to the women’s final where she met Iranian Fatemeh Hosseini Kahaki, who had knocked out both her opponents in her route to the final.

It was a tough challenge for the Vietnamese fighter who was smaller, shorter and less experienced than her opponent.

Kahaki took full of her reach advantage to score points from the bell and won the scorecard in the first round.

However, the minute break between rounds was useful for Mai.

Coach Nguyễn Huy Thịnh asked her to change tactics, closing the distance more with Kahaki to use her knees in the clinch.

“Kahaki was physically strong. She fought aggressively in the first round. But I found that she was not good with knees. If Mai got closer to her she would not know what to do,” said Coach Nguyễn Huy Thịnh.

“In fact, Mai’s physique was her weak point. She was exhausted resisting Kahaki in the first round. She dropped behind in the second round too, so I had to scream loud to lift her spirits while reminding her of our tactics.”

The judges scored the second round as a draw, but Mai was more confident going into the final round, which she won via points. 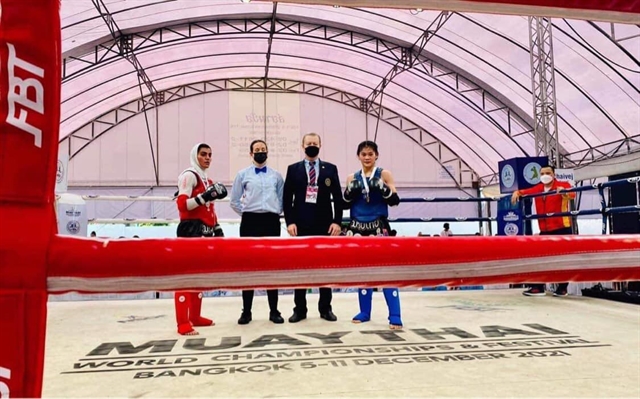 Bàng Thị Mai (right), prior to the final at the World Muay Thai Championship U23 60kg class. Mai went on to win the fight and take gold. Photo courtsey of Trịnh Nam Thái

“I knew the World Championship would be very difficult. I was a new face of the tournament so I just tried my best in every match, fighting for the nation and myself,” said Mai.

“My final rival was really tough. She is bigger and taller than me but I received strong support from national coaches, as well as my local club trainer, who helped me fix my mistakes every day. They helped me to win the final and take my first world gold.”

Supporting her athlete online, coach Đỗ Thị Thúy said they researched her rivals carefully, adjusting her training and tactics to make the most of their weakness.

“Watching her in the first matches, I knew Mai spent a lot of energy to win. But I advised her to keep positive and remain relaxed, resting enough to recover well for the next fight. It is important for her to be prepared to overcome her limits,” said Thúy.

It was the first title fight for the 21-year-old, helping Việt Nam to finish the tournament with two golds, one silver and three bronzes. It was a successful result for the team after world champions Nguyễn Trần Duy Nhất and Bùi Yến Ly were stopped from early rounds.

Mai was born in 1999 to a Cao Lan ethnic minority family in the northern province of Thái Nguyên.

Bàng Thị Mai (right) trains in four different martial arts. She is the national champion of all four. Photo sotp.thainguyen.gov.vn

Martial arts are not very popular in her hometown but the little girl convinced her parents to let her join a wushu’s sanshou (combat discipline) club when she was 14.

Her passion and talent made her a member of Thái Nguyên team in 2013. And she grabbed silver at the national youth championship just a few months later.

Muay Thai and kickboxing were relatively new sports in the province at the time. It was difficult to recruit athletes so the provincial sports officials decided to establish new teams from athletes of other martial artists. Mai, who also practised traditional Vietnamese martial art, was one of them.

“I was confused in the way of fighting and regulations when practising Muay Thai and kickboxing. For example, in Muay Thai, it is allowed to attack with elbows and knees, which you cannot do in sanshou or kickboxing,” said Mai.

“However, punching and kicking were much more familiar. I just needed to practise harder a little to manage all skills and techniques.”

In 2019, Mai made her international debut at the Asian Muay Thai Championship and won a bronze medal in the UAE. 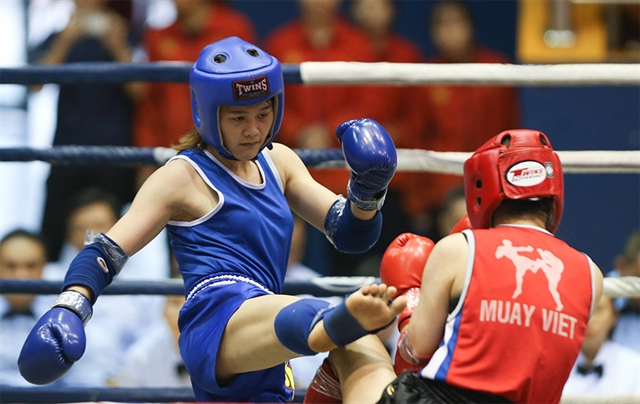 “I love martial arts. It is of no importance whether the athlete is male or female. All you need to be successful is passion and determination,” said Mai, whose World Championship gold provides a great platform for her in the run-up to Southeast (SEA) Games in May in Hà Nội.

“This will be my first SEA Games. Being an athlete from the host country isn’t going to change my training schedule. I am still working hard, sharpening my skills to grab the highest result for Việt Nam and my Thái Nguyên Province too.” VnExpress News

Previous Should we be all ears on the football pitch?
Next Hà Nội cow farming sees room for development

Vietnamese athletes to get $1M bonus for Olympic gold medal

Vietnamese star striker among nominations for best footballer in Asia

VFF to pay coach Troussier more than his predecessor