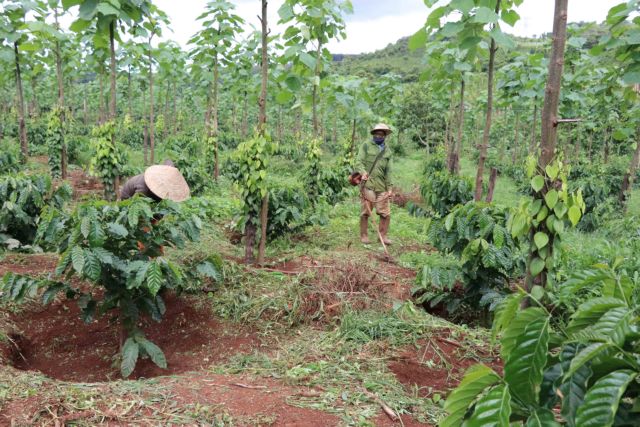 HCM CITY – Intercropping fruit and other plants in coffee orchards offers higher and steady incomes for farmers in the Tây Nguyên (Central Highlands) region, according to the Ministry of Agriculture and Rural Development’s Plant Cultivation Department.

The country’s largest coffee growing region has more than 163,000ha of fruits and other plants in coffee orchards, or a fourth of the area under coffee.

They include mostly durian, avocado, black pepper, cashew, and macadamia.

The intercropping produces a diverse range of agricultural products, creates jobs, improves farmers’ incomes, reduces the risk of price and demand fluctuations, and stabilises coffee production, according to the department.

It also provides shade for the coffee trees, reducing evaporation, and shelter from winds, it said.

In Đắk Nông Province, the income from durian and coffee is VNĐ80 million ($3,500), almost twice as that from only coffee.

With encouragement from local authorities, farmers in the region have also replaced old coffee trees with fruits and other crops in recent years.

He has also invested in a drip irrigation system and used advanced techniques, and gets high yields from the intercropping, he said.

Nguyễn Thị Mến, chairwoman of the Ea Tar Farmers Association, said coffee farmers had switched to durian and avocado on around 70 per cent of the commune’s farmlands.

The number of poor households in the commune had reduced significantly and more than 30 per cent were affluent, she added.

They include the Việt Nam-Sustainable Agriculture Transformation (VnSAT) Project and local ones to help farmers intercrop fruit trees.

VnSAT aims to improve the competitiveness of the agricultural sector, especially rice and coffee, to increase farmers’ incomes and reduce environmental impacts.

The region has an average coffee yield of 2.8 tonnes per hectare as against the global yield of 1.8 tonnes, according to the Ministry of Agriculture and Rural Development.

He uses mulberry leaves to breed silkworms and sells their cocoons.

He earns an income from selling jackfruit, coffee and silkworm cocoons, and is soon going to harvest durian.

“The intercropping offers higher profits than monoculture coffee,” he said

The cultivation of fruit trees also helped protect the soil, he said.

Farmers could avoid depending completely on one kind of crop and be at the mercy of market price fluctuations, he pointed out further.

The Tây Nguyên provinces have helped coffee farmers link up with companies to ensure sustainability and produce high-quality beans for exports, including to international standards such as the common code for the coffee community (4C), UTZ, Rainforest, and Fair Trade.

Đắk Lắk Province, which has the largest area under coffee in the region, has more than 45,670ha of the beans grown to international standards, or 22.1 per cent of the area, according to its Department of Agriculture and Rural Development.

Companies and co-operatives would be offered assistance for registering for standard certification and with access to new markets, developing brand names and expanding linkages, she said.

The province would prioritise loans on easy terms to companies that upgrade their technologies to improve coffee quality and value, she added. – – VnExpress News