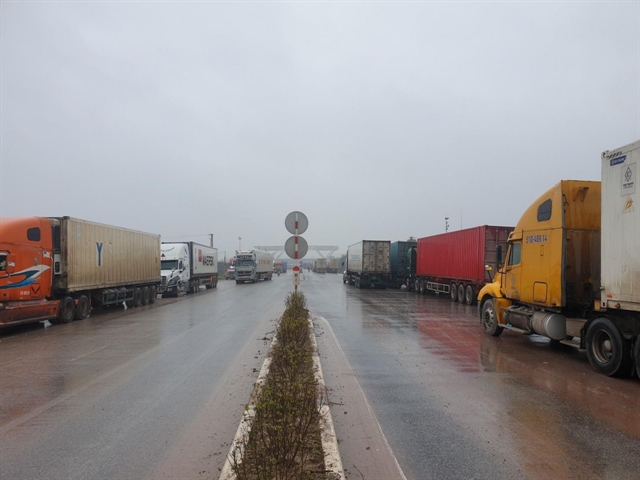 Trucks lining up at Hữu Nghị border gate, waiting for customs clearance. By March 4, the number of trucks stuck in Lạng Sơn stayed at around 1,400, including 800 trucks carrying farm produce. — Photo thoibaotaichinhvietnam.vn

HÀ NỘI — Restructuring of agricultural production and supply chains are key to meeting the specific demand of every export market including China, according to Minister of Agriculture and Rural Development Lê Minh Hoan.

He was speaking during a virtual seminar on Friday over solutions to end trade bottlenecks.

At the hubs, agricultural exports stuck at border gates would be processed and packaged to preserve their quality, reducing the risks of deterioration.

During times of pandemic, the hubs become “green zones” to screen out infected exports, complying with China’s COVID-19 preventive regulations.

He said Quảng Ninh Province is establishing such a hub, so Lạng Sơn should follow suit.

The minister also urged firms to cement export alliances for every specific market, stepping up information-sharing and improving competitiveness.

“Thai farmers can keep track of prices in Beijing wholesale market just one hour right after opening but we are a bit slower regarding information-sharing,” the minister admitted.

He said the ministry was also launching a programme to encourage the use of identification codes in growing areas, farming areas and processing facilities.

All the information related to each code would be uploaded to a data portal which firms and associations can rely on to make business decisions and avert market risks.

Lastly, the minister said it is crucial for exports to shift from unofficial channels to official channels, and from road to railway, sea and air to reduce trade uncertainties.

The director said not only customs clearance should take place at the transit zones but also screening, selecting and packaging of farm produce, reducing the risks and the costs of rejection.

As China raises the bar on farm imports, he suggested a three-step solution to ensure stable trade.

First, export products should be developed in line with all standards and requirements of the target market.

Third, domestic exporters should comply with all trade agreements of which Việt Nam and China are both members, including Regional Comprehensive Economic Partnership.

The vice chairwoman called on authorities to draw up a comprehensive plan to make official exports the norm in bilateral trade, effectively ending unofficial channels.

She also revealed that about 1,400 trucks were lining up at the province’s border gates, of which 800 were carrying farm produce.

The number may hit 2,000 between March 15 and April 20 and likely to continue to rise during harvest times.

Director Chinh underlined that 15,000 trucks had passed customs clearance since January 25, and all 13 border gates had opened to facilitate trade flows thanks to  efforts made by the Government, ministries and sectors, as well as localities. — VnExpress News